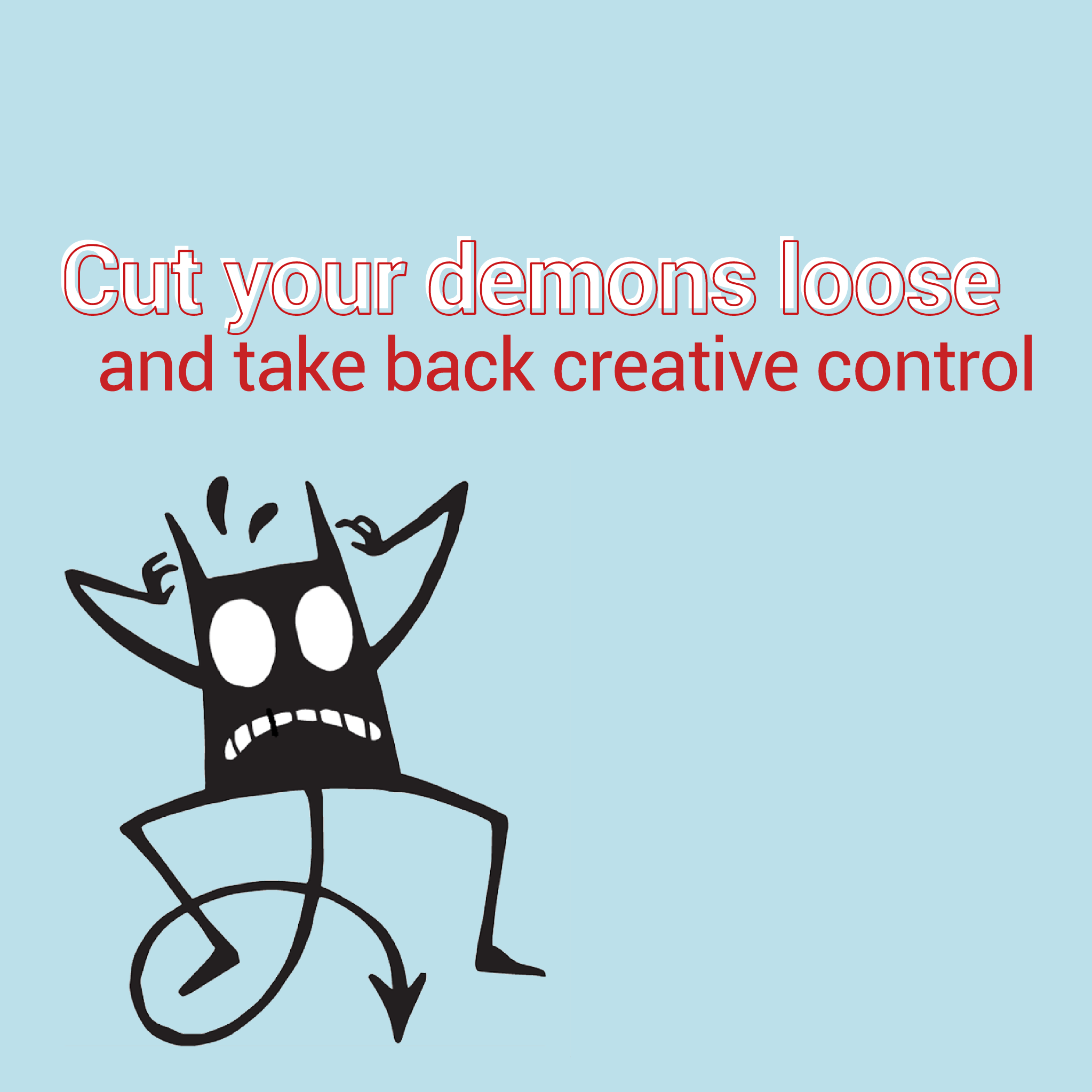 You should be making your creative work every day.

You should be spending more time with your family and friends.

You should spend a lot more time in selling your work.

You shouldn’t have to sell anything: your work should speak for itself.

You should be much further along in your career.

You should give it up. Who do you think you’re fooling? 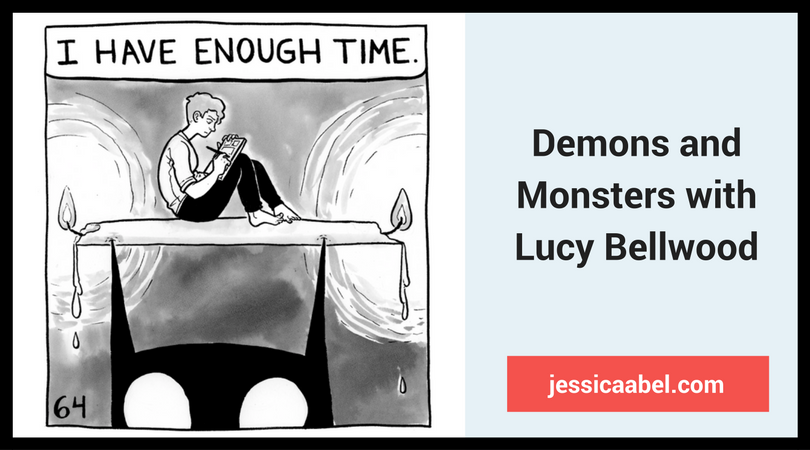 I’m sorry. I didn’t mean to give credence to that awful voice inside your head. Because I know you probably say stuff like this to yourself. Just about everyone I’ve ever met does.

That’s the voice of the dreaded “Should Monster.”

I first started thinking about all those “shoulds” we feel when I wrote about the creative marathon, and realized there’s a disastrous disconnect in between how most people actually work best (or at all) and how they imagine they should be working.

Here’s the truth: Every time I’ve actually met people I imagined had the secret all figured out? They didn’t.

But there’s a fatal mismatch between the idea we’ve imbibed about what “real” artists do and our reality, and that gap causes unending pain, as we compare and fall short, over and over again.

“Should” is not a useful filter.

Sometimes your Shoulds reflect possible real goals for yourself. In which case creating a real plan, that manifests itself in the Euclidean space-time continuum in which we live, is what’s called for.

Simply telling yourself “I should write every day”, depending on your available time, might reflect a reasonable possibility and an actual thing you’d like to do. But if you don’t then set aside 30 minutes or 2 hours or whatever to actually writing, telling yourself you “should” is hurting, not helping.

You need to divide that kind of “should” (the positive, goal kind) into piles:

On the other hand, sometimes the Shoulds are contradictory.

Sometimes they are just plain hurtful, abusive, and untrue.

When I taught the first version of the Creative Focus Workshop, cartoonist Sarah Leavitt shared this little horror, who she drew to hang over her desk and embody all those nasty things she heard from her inner critic. And thus the Should Monster was born. 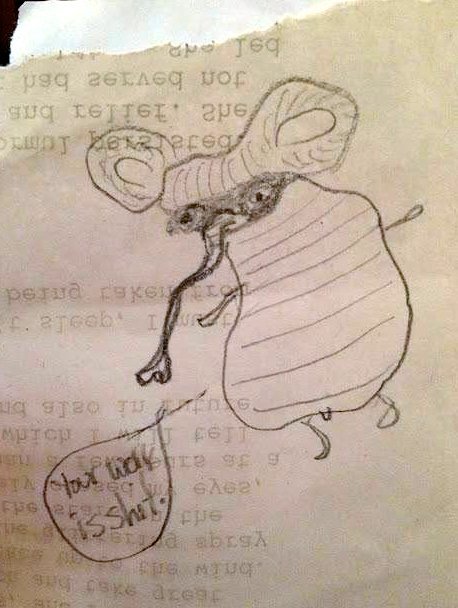 The Should Monster is an activity I do with Creative Focus Workshop students: I ask them to draw their should monster (or make poetry about it, or descriptive prose, or a photo. Something concrete). The idea is, you draw it, you steal its power.

It’s an emotional lesson. Not everybody can manage to actually see it through, not right away. But the more you put a face to the voice, and thus are able to recognize when you’re falling into this pattern, the more you take control of the situation.

And now I’m going to tell you something that will seem completely unrelated.

It’ll all come back together, I promise.

There’s this cartoonist I started to notice a year or so ago, Lucy Bellwood. I stumbled on a talk she gave at the Animation Workshop (where I also recently was an instructor) about the power of social media and active community-building to support a creative career. 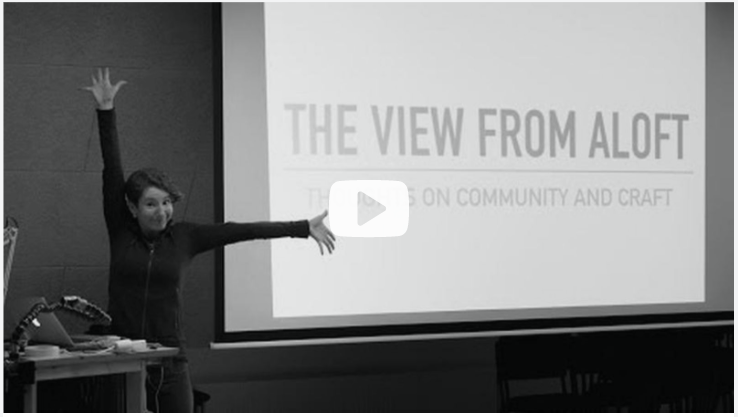 The audience for the talk was high-level: a select group of Danish comics students. Nonetheless, Lucy’s talk was remarkably accessible: clear, positive, confident. She laid out a case for building your tribe (“shipmates”—tall-ship sailor, remember?) via social media so that then they’re there for you when you really need them, i.e. when you’re running a Kickstarter campaign or a Patreon (she’s killing it on both platforms).

And while I’d never been a social media doubter, nor do I invest my time in it all that deeply, a (lack of) strategy I started to question faced with Lucy’s evidence. She’s convincing.

And then the very next time she swings into view, it’s with this guy: 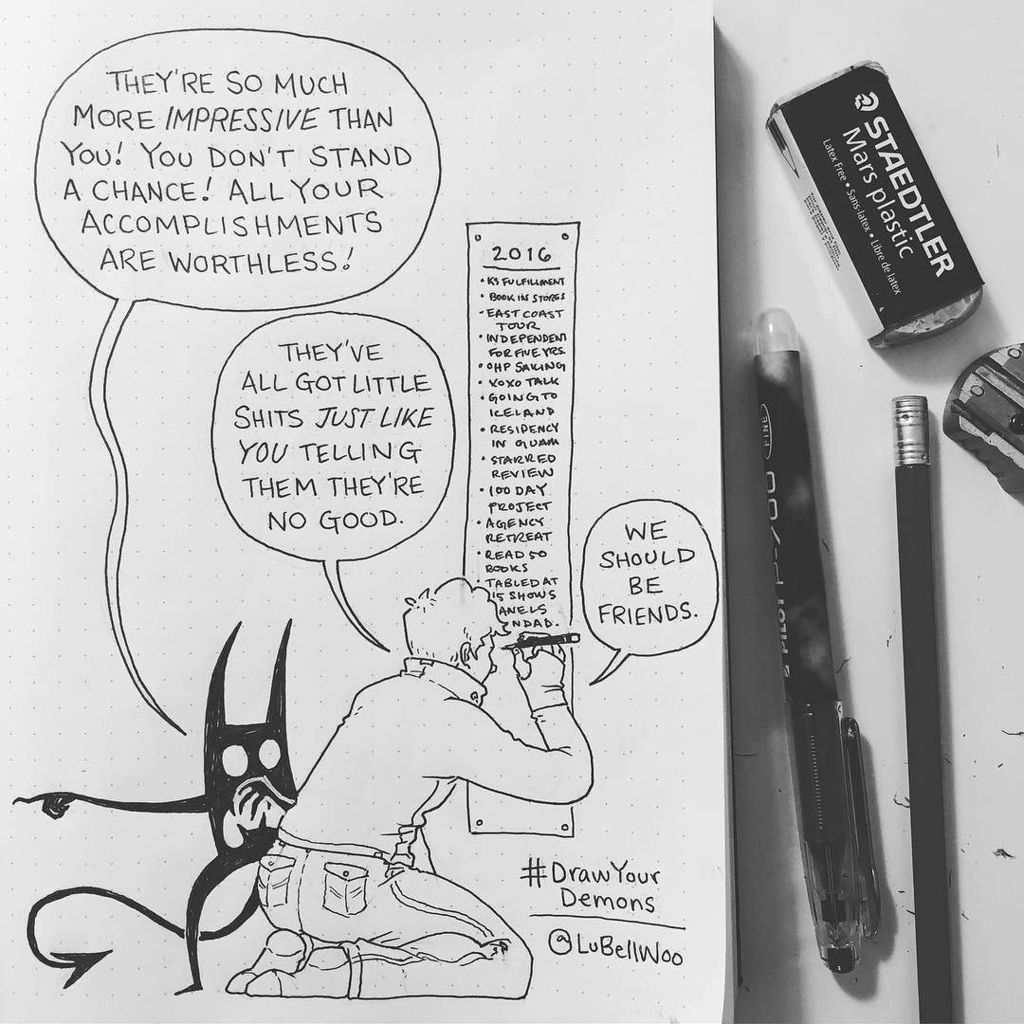 Lucy has a Should Monster?

I mean, of course Lucy has a Should Monster. Everyone has one. I should know that by now. (She calls hers a Demon.)

Lucy had no idea I was over here talking about drawing “should monsters.” She was out on her own, drawing her demon over and over. And just as is the case with my students, as she draws it, she absorbs its power, denatures its critiques. She becomes partners with it in some sense.

Lucy committed to drawing her Demon for 100 days straight this year. She posted her Demon Dialogues for the #100DayProject on Instagram, and the response was so overwhelming, she decided to put together a book. And a plushie. And a print.

And to do that, she is running a Kickstarter. 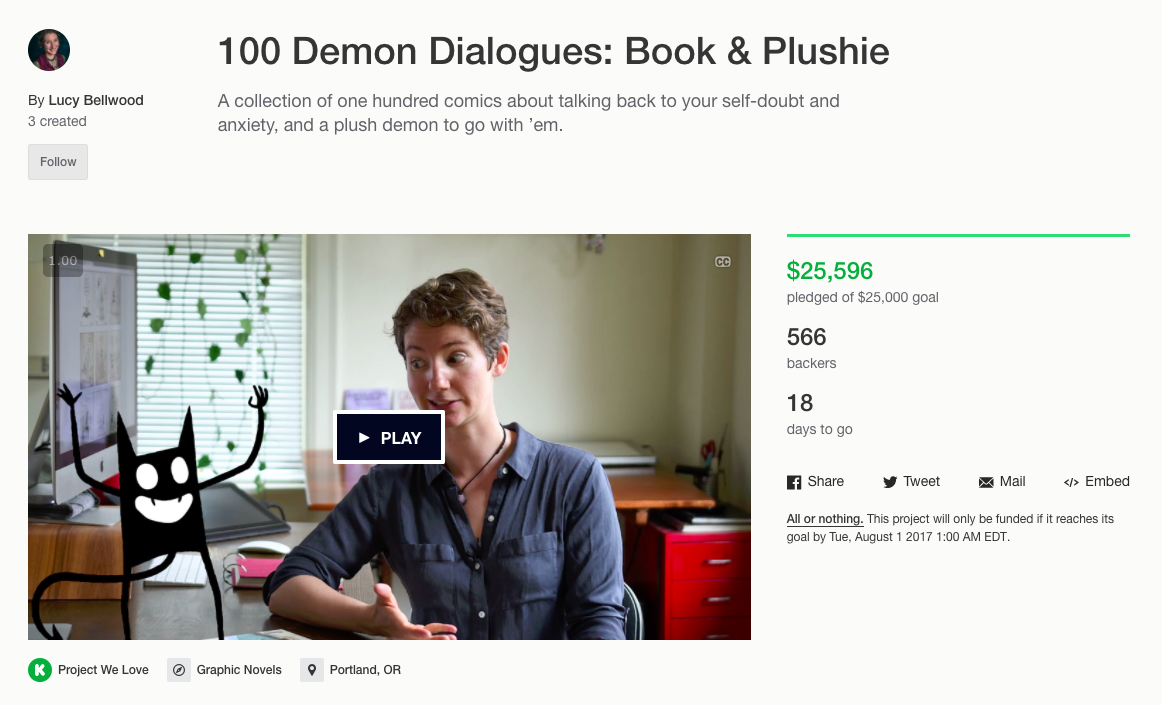 Lucy’s talk about the power of community and social media, that one I first saw, focuses on how being your unique vulnerable human self on social media is key. (See what I did there? Told you it would come back together…)

Diving into your own interests, and connecting with others over them, is key.

And 7-or-so years into her journey, she can create a crazy-great kickstarter, and see it fully funded in 36 hours.

I’m writing this four days after it launched, and if you want in, you better jump, because Lucy is going viral with this thing.

Just a few weeks ago, I invited Lucy to do a live interview/roundtable discussion about her Demons, her use of social media and crowdfunding on Kickstarter and Patreon, and her thoughts about how this kind of success at audience-building can translate into a sustainable career, rather than just 24-7-365 hustle.

When I got in touch with her, I had no idea she had this Kickstarter planned, and of course no idea it would take off like a rocket. Almost like I’m psychic, right? 🙂

Lucy and I talked about self-doubt demons and living the creative life on Tuesday, July 25. You can watch the replay! 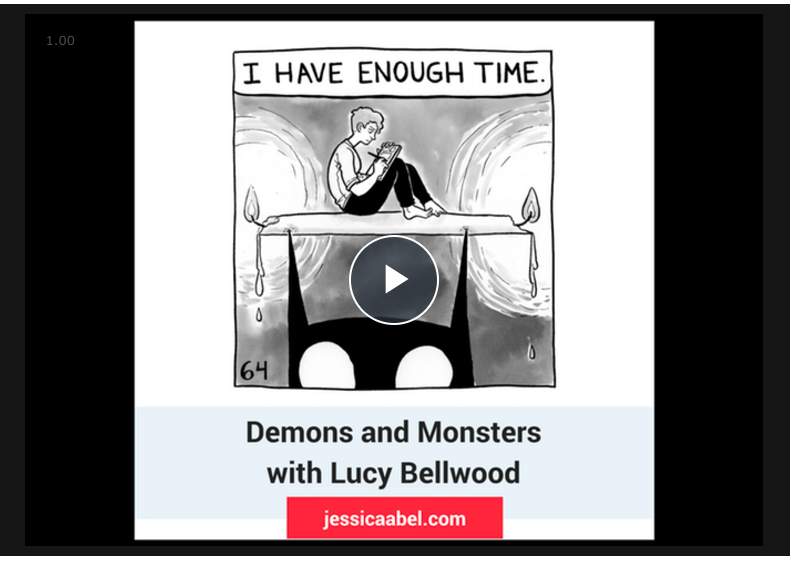 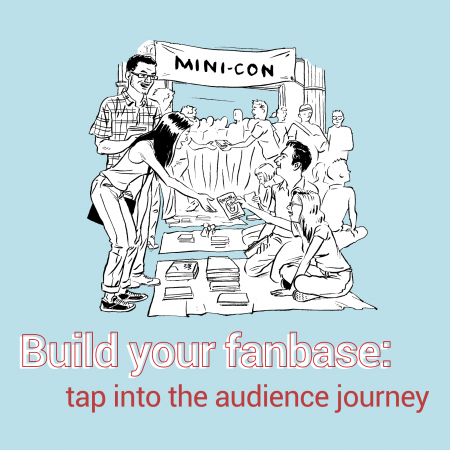 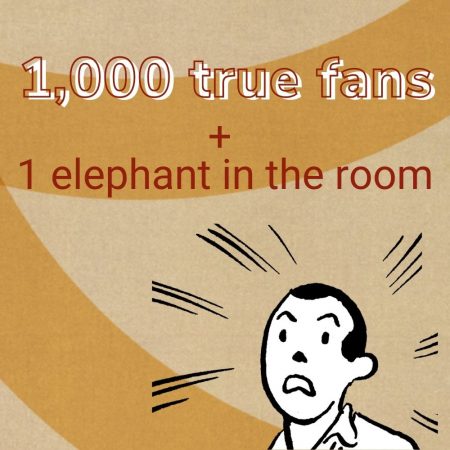 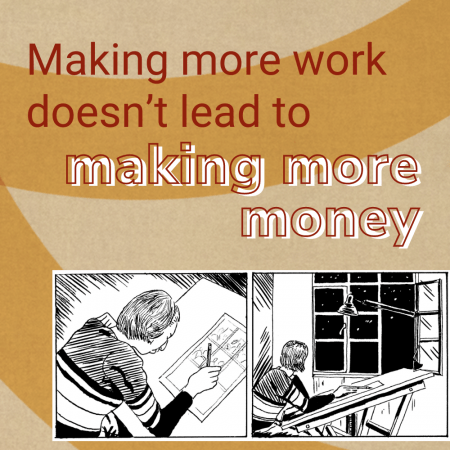