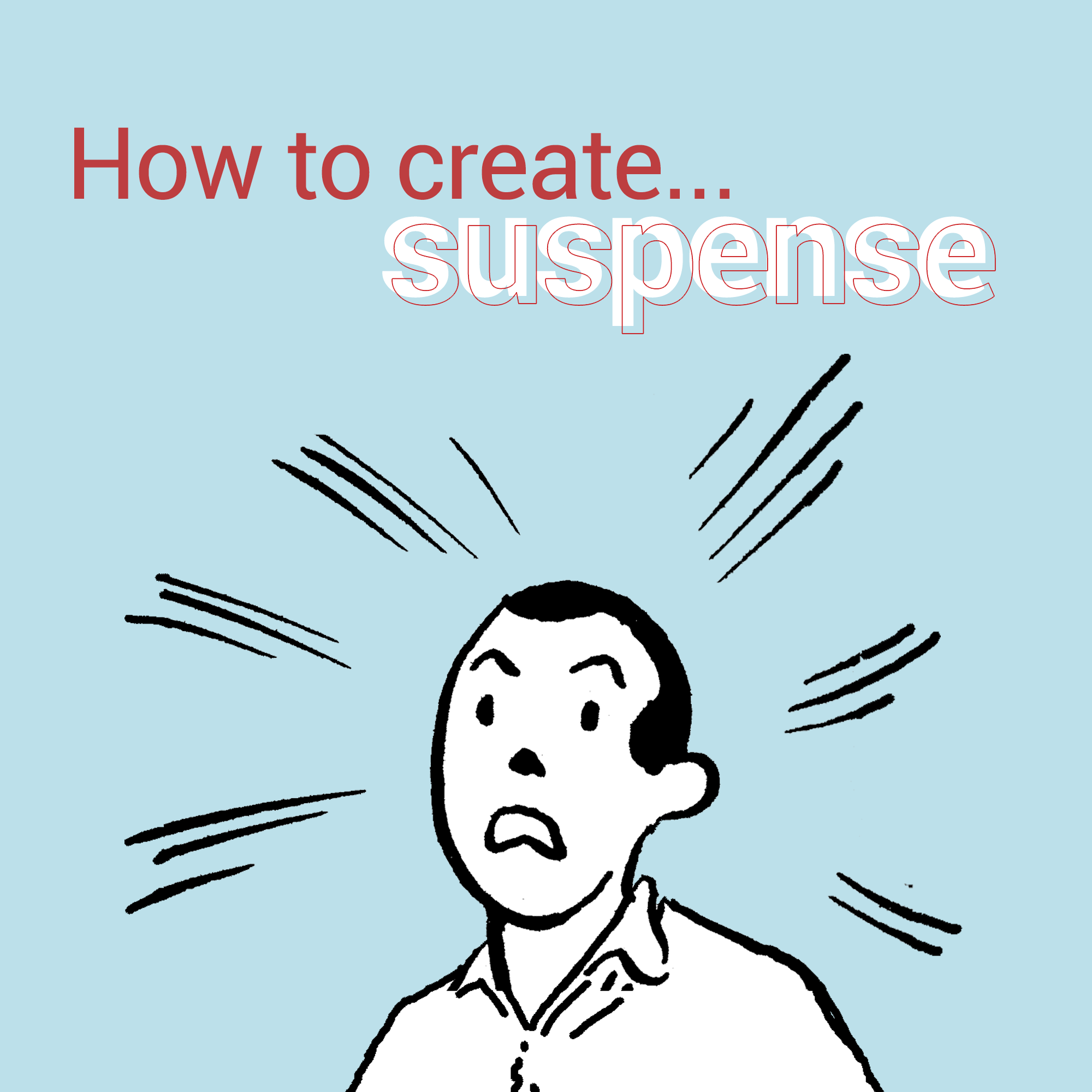 This is part 4 of the Story Building series, based on Out on the Wire.

Some people prefer to call comics “sequential art.” I understand. The word “comics” is awkward as the name of a medium, and we’ve been casting about for a replacement for a long time. And clearly, one of the things that’s usually a core feature of comics is that there are pictures in a certain order that draw meaning from the juxtaposition and order (let’s not quibble about single-panel cartoons today. That’s for another article).

But the truth is, “sequential art” isn’t a particularly descriptive name for comics because all narrative art is inherently sequential. First there’s one scene, then another. First one line of poetry, then another. The order matters, even when it absolutely doesn’t—Burroughs’ cut up poems are striking and revolutionary only in a world where most other poems are not cut up.

So if all narrative art (and even narrative stuff-that-may-not-be-art, like this article) depends on a deliberate order of thoughts or images or statements, why don’t we pay more attention to it? Making an outline out of whole cloth, just sitting down and deciding what order to put things in, that’s extremely hard work. So if you’ve got the option, there is a simpler way.

Chronology is the order in which things actually happened or (for fiction) could happen. When I interviewed the great radio producers who appear in Out on the Wire, they came back over and over to the idea of depending on chronology as the default structure of a story.

A story in it’s purest form is somebody saying, this happened, and then this next thing, and the power of the anecdote is so great…it has a momentum in and of itself.

It feels like a cheat, like it couldn’t possibly produce good work. And it’s true that it’s not enough all on its own. But this simple structure, what Ira Glass calls an “anecdote,” is the key to understanding how to make suspense work for you.

Ira Glass explained how this works in Out on the Wire, using an old This American Life episode as the example.

From the TAL episode:

“So Brett was on the subway platform, afternoon rush hour, it’s mobbed. And down the platform he sees this guy. The guy goes up to one person after another, stands very close, says something, and moves on. He’s nicely dressed, doesn’t seem to be asking for money. And he’s getting closer, he approaches person after person, walks up to them, says something quietly, and moves on. And as he gets closer, Brett can hear what he’s saying.”

Now at this point, no one’s turning off the radio. But why? If you look at it, it’s a completely banal story: a guy sees another guy on a subway platform. Where’s the suspense in that?

The answer gets to the heart of what makes narrative work:

Also—and this is key—this banal sequence has raised a question, namely, What’s the guy saying? And you’ll probably stick around ‘til you find out.

Narrative suspense is your friend as a writer. You want to use that ancient power as one of your tools to keep people listening. 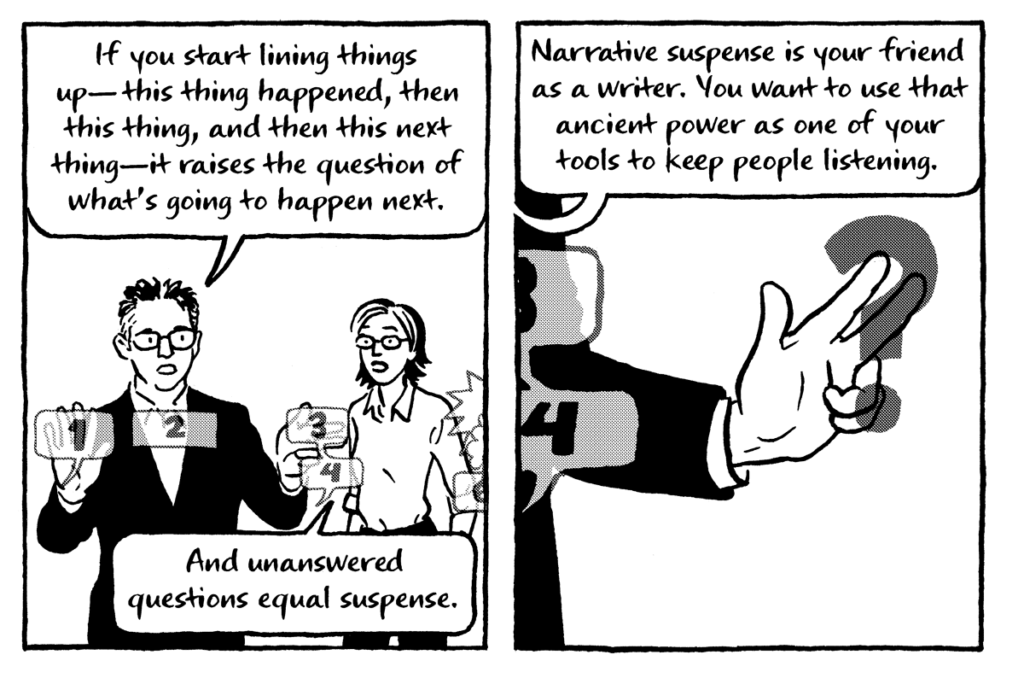 So, sequence (that is, chronology) + a question = suspense. Maybe not a lot of suspense. But sometimes it’s enough.

But simple chronology is not enough to carry the story beyond a short sequence. We already talked about the Focus Sentence and the XY Story Formula, and both of those techniques will help you filter what’s important in your story and what’s not. But assuming you have all that under control (big assumption, I know), and even that you have some chronology to use, you still don’t know much about how the story will actually play out.

I have another “formula” that will help fill in the gaps. It was proposed by Soren Wheeler, the senior producer of Radiolab, almost as a joke. I call it, “The Soren.”

I mean, he was kidding. But his off-the-cuff comment got to a few crucial points. Escalation (this then this then this), climax (and you wouldn’t f—ing believe it but this), and framing (the reason this matters…). Framing is a big topic, and I’ll come back to it in another article. Meanwhile, let’s talk escalation and climax.

In Out on the Wire Workshop Episode 2.5, we talked about listener’s story that demonstrated the value of these tools.

I called up the author, MK Czerwiec, to ask her about her graphic novel in progress, Taking Turns: Stories from Unit 371.

MK is almost done with her book. But still, her first attempt at an XY Story Formula didn’t get close to showing us why we should be desperately checking her website for news on the pub date.

I’m doing a story about a new nurse on an AIDS care unit in the 1990s. And it’s interesting because she becomes an artist along the way.

I’m doing a story about a new nurse on an AIDS care unit in the 1990s. And it’s interesting because she struggles with appropriate boundaries, has a needle stick. And, as a way to cope, she becomes a visual artist along the way.

Better, but still no cigar. And so I suggested she try a Soren.

With her book almost finished, MK has an advantage in that she’s got the chronology and the arc written. But that doesn’t mean she knows why she’s been working so hard all this time.

MK’s dad died while she was in nursing school. Then she went into AIDS care so patients wouldn’t remind her of him. Then she started painting wooden boards to memorialize her dead patients. Then she became friends with a patient who was an artist, a painter, and you wouldn’t effing believe it. But she had an accidental needle stick or caring for him.

The reason that this story is important to every single person walking the face of the earth is because we all deal with loving and losing those around us and we are all taking turns being sick. And there’s no real divide between a patient and a caregiver. And it turns out. Art can help us. As the poet Marie Howe said, Art can hold it.

That is just… so good. But she felt she couldn’t have gotten there without having tried a couple of XY Story Formulas first.

I do think it was definitely a step-wise process. Because you know it’s like opening the door. And then the focus pries the door open a little more. And when you asked what I was thinking it made me dig deeper and find the essence. And then the Soren took that to the next level.

Why are you putting this out into the world, not just making it for your own enjoyment? That’s the question you need to answer for yourself.

The Soren really helped me pull together why it was important. And that last part is  really important too. Because as the person creating the story, it gives you that distance of not looking at it as yourself. Not why I think this is interesting. But here’s why everyone should be interested in this, because that’s that universalizing piece.

And here’s the thing: MK found that the simple process of laying out the events in order, where they depend on one another, was key to her breakthrough.

I think it had to do with pulling out what the essential pieces are of the story, and putting them in order. The “then” is very powerful because it makes you put it in order.

By placing the events in order, and using the “then,” (or even better, “therefore”), you’re forced to understand how the events are not only in order as they happen in time, but they are dependent on each other.

There is some outcome of that thing.

THEREFORE this other thing happens.

And so on. Until you get to the climax.

That’s the “you wouldn’t f—ing believe it, but _____.” The climax is the no-turning-back event, where whatever you set up in the focus sentence, whatever the protagonist is fighting to overcome, that fight is either won or lost, definitively.

This time, I challenge you to take the story you’re working on, that You may have done a focus sentence and an XY for, and create a chronology. Make sure you’re using the power of the “then” or “therefore” to build the escalation, and identify a scene or moment that speaks back to the setup, to the original obstacle the protagonist is trying to overcome, and answers the question definitively: will the protagonist make it? Or not?

Figure out what your story is really about—story formulas aren’t magic, but a story without structure will eat you alive. Sign up for my cheatsheet!

This is part 4 of the Story Building series, based on Out on the Wire. 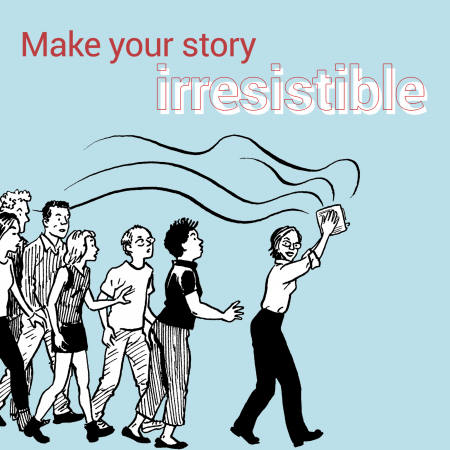 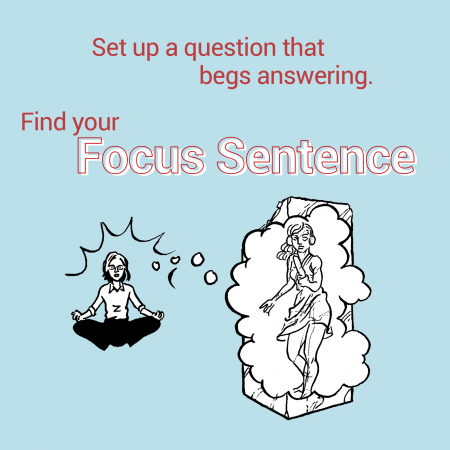