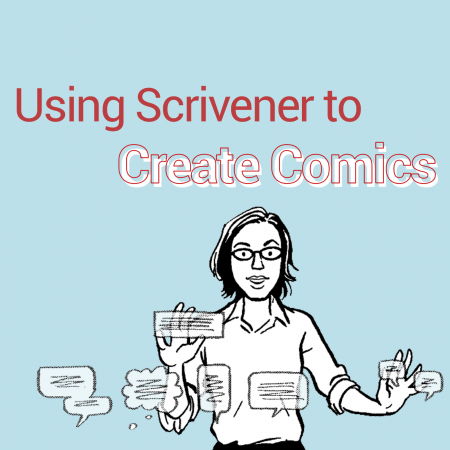 During the Festival International de la Bande Dessinée in Angoulême, Alison Bechdel stopped by my studio, and geeking out with her over writing tools was enough of a kick in the pants to get back to things here and set up a guide for using Scrivener to script comics. 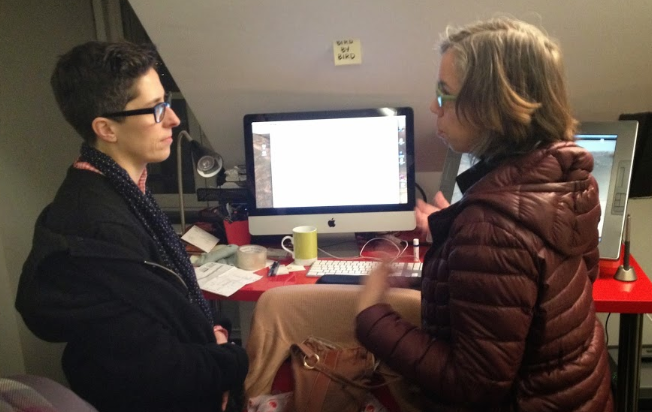 Alison and I have a lot in common when if comes to our love of writing tech.

Last year, I wrote a post about “visual scripting,” my InDesign drafting technique for comics scripts (based on ideas Alison initially came up with). Since then, I’ve only used it more intensively, and I love it. I totally stand by that post. The process makes envisioning the finished page while writing it so much more transparent.

That said, a huge portion of my writing process doesn’t happen on the comics page, and all that stuff, I do in Scrivener.

I’ve been working on Trish Trash: Rollergirl of Mars since Christmas of 2006 (or earlier, if you count the illustrations I drew that got my wheels turning…as it were). From initial notions to final outline structure, the whole thing has been composed in a piece of writing software called Scrivener. When I first started, I even drafted the script itself in Scrivener, but when I learned to do visual scripting, I switched to that. The method and reasons for my switch are a whole tale in themselves, that perhaps I’ll tell later.

Here’s how Scrivener helps me write.

Keeping track of all the parts

Like many people, I used to write in Word, which meant I had tons of small documents scattered around for every project. Drafts, notes on characters’ backstories, notes on the world of the story, ideas for chapters or future story arcs. Most of this stuff would basically go into a black hole on my hard drive, never to be seen again. How am I supposed to tell the difference between “draft 1 notes” and “notes on first draft”? I mean, better titling would have helped, but even the process of opening and closing all those bits to find out what I’d left in there was tedious and ineffective.

Then in the mid-aughts, I found Scrivener. Finally, I could easily gather and organize all my notes. I won’t exaggerate; there are still often too many notes that go unread. But I at least know where they all are and which is the latest version.

For the Trish Trash project, I have a number of subfolders in my “research” folder to hold all my notes and ideas about the characters, backstory, and because it’s a scifi book, the world in which it takes place (Mars 2192, baybee!)

At the moment, I’ve got four large categories in “research”:

I’ve also got a “done” folder to hold notes I’ve dealt with and don’t need to see again. 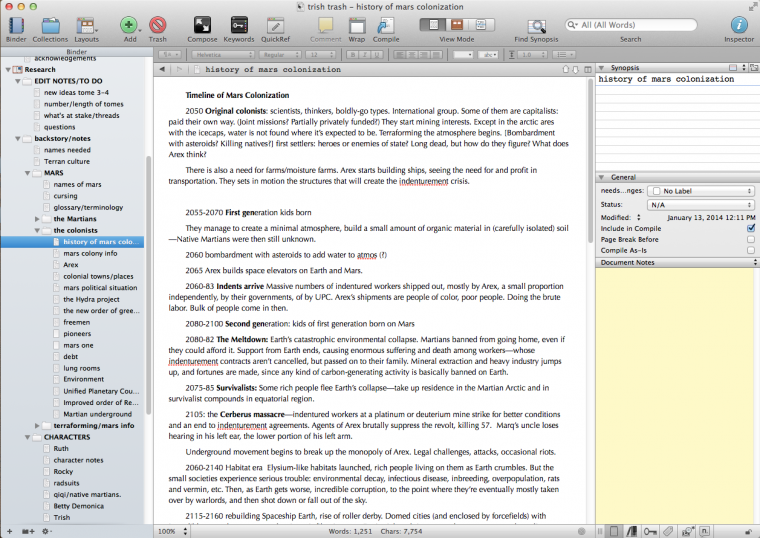 By the way, three other key tools for developing my scifi world (that I probably won’t write posts on, but you never know):

Having all these folders and documents and being able to sort through them quickly and easily (and do powerful saveable searches on them) is reason enough to use Scrivener. But the best part for me is the dual-pane setup (I prefer the vertical orientation to the default horizontal) and “quickref” boxes to have more than one document open at a time, so that if I need to refer to what I’ve written about the early history of human settlement on Mars when working on the outline of the new volume, I can have them both up and work from one to another, without having to toggle anything. 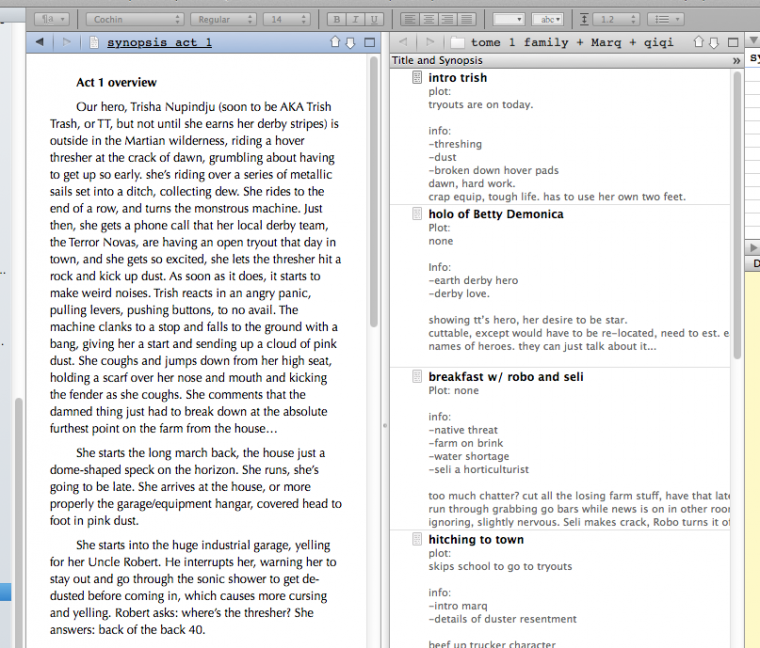 Click to enlarge. Trying to show you guys what I’m talking about without showing spoilers is not easy!

When I begin a new volume, I’ll start by thinking through (and noting down) the larger arc of the book, and then roughly tracking though the segments of action. Then I’ll start breaking it down into individual scenes. This is a great use for dual-pane, by the way: have your plan open in one side while you quickly add pages in another.

So, in the “Draft” folder, I’ve got subfolders for each volume (where initially, I’ll also have an overall notes document, which I’ll move out to Done at some point later), and then subdocuments for each scene.

There are a lot of subfolders and documents nested in here. No spoilers.

These subdocuments have three useful (for me) parts: the title, the synopsis, and the body. I generally fill out only the title and the synopsis, which, when you convert views to “outline” or “corkboard” will show up all together. Sometimes I’ll take some notes or draft some dialogue in the body of the document, but really, these days, I try to reserve that writing for working directly in the page, in my visual script. 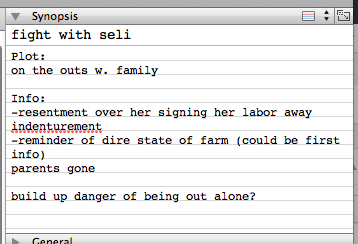 This is where you can enter the synopsis of the scene. I usually don’t write such detailed synopses; these are like this because I needed to analyze and re-write, so I was trying to track what information I was establishing, where. Normally, it’s just a short description of what should be happening.

With the outline or notecards, I can get a global view of how the book is looking, and make sure I’m maintaining all my narrative threads. I can easily scan my outline, chuck bits, rearrange, and even color code and tag and annotate to track story arcs and characters (in possibly way too many crazy ways. The Scrivener tutorial that comes with the program is very thorough on this). I can create status stamps (“to do” “still sucks” “rewrite” “OMG genius”) that you can cause to show up stamped across your notecards in the corkboard view. A side note: the fact that the “corkboard” looks like an actual cork board is dorky. But if you can ignore that, it’s a very useful tool. 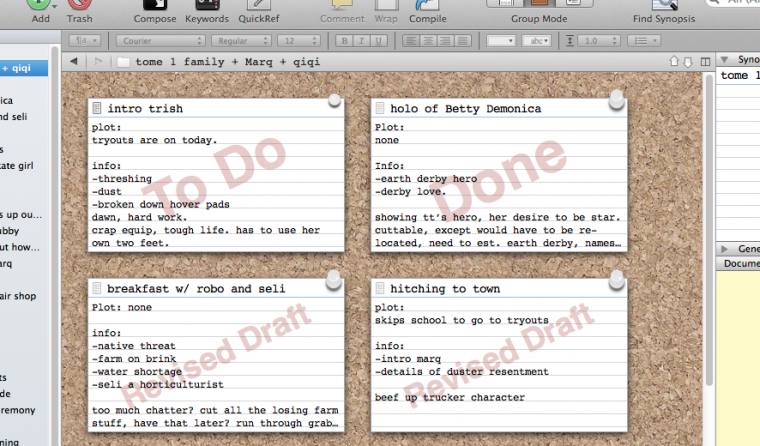 You can write your own “status”-es to stamp on the cards. I did not write these.

When I get a complete, revised outline done (which may happen halfway through the drafting process in the visual script; I keep coming back to it), my work in Scrivener is done. I take those scene ideas straight into the visual script and use it to map out scenes and sequences into physical space, and then I’m ready to write. Writing while engaging with the physical space is a tough discipline, and I’m still getting used to it after 20 years or more of drafting script in a text editor of one kind or another. But it’s better. The work is better. 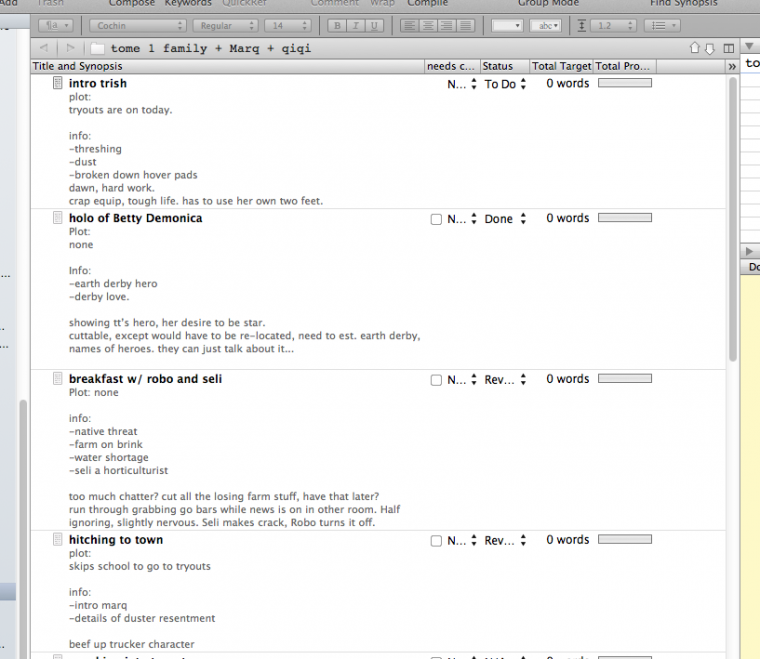 Outline view of the same content. You can color code this view by using “labels”.

I use Scrivener similarly, though perhaps more intensively, for nonfiction comics (I will perhaps talk about that in a future post).

Finalizing a piece for others to see

When I do end up fully drafting a piece of writing in Scrivener, like this blog post, I usually import the text into something more adapted to the task of finalizing the material. In the case of  this post, that will be WordPress. Scrivener does have formatting tools, but they’re demanding to use properly, and the result isn’t always all that great (or maybe I’m just bad at it) (very possible).

If you’ve gotten this far and found this helpful, I encourage you to get your hands on my two textbooks about comics, Drawing Words & Writing Pictures, and Mastering Comics. You will like them too. 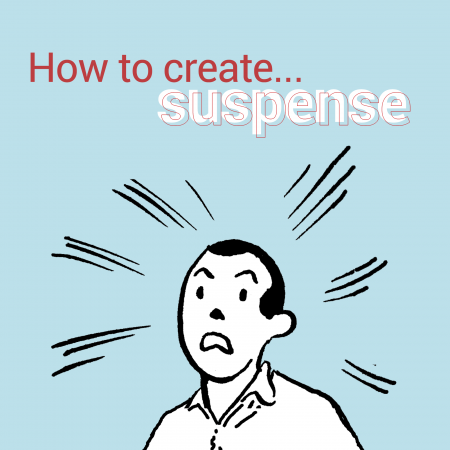