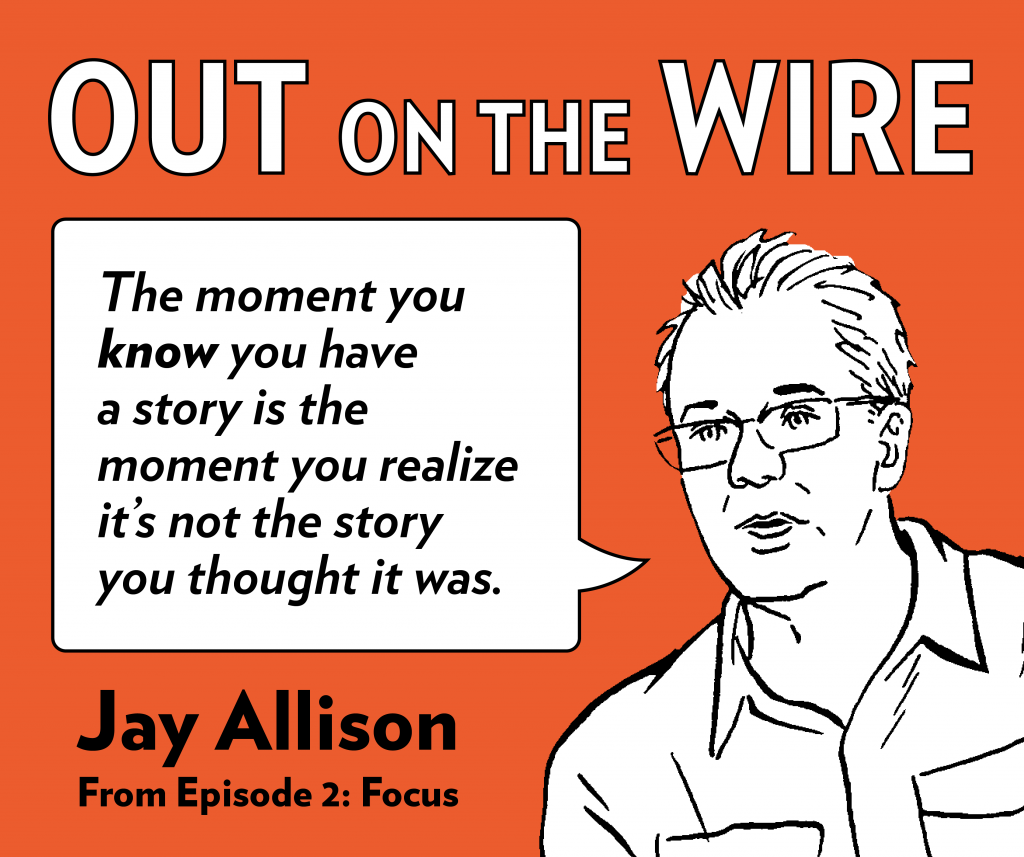 How can we know if an idea is a good one? This time on Out on the Wire, we investigate how to refine story ideas using the focus sentence and the X/Y story formula. Plus, Ira Glass recounts a reporting trip gone sideways and Jay Allison’s takedown of formulaic storytelling.

If you’re looking for the transcript, you can find it here.

Links to stories we talked about:

One Acre by Jessica Kittams

This 14-Year-Old Girl Just Bought A House In Florida, from Planet Money

This American Life 505: Use Only as Directed

Ira’s handwritten notes from his day out with the twin principals:

Your mission is to craft a focus sentence or an XY Story Formula, or, even better, both, for your narrative project.

Remember, a focus sentence is:

and the XY story formula is:

I’m doing a story about X…

and it’s interesting because Y…

Your first try, like mine, might be kind of enh. But just because your focus sentence isn’t any good doesn’t necessarily mean that your story is no good. Dive in again and make it better.

Where can you seek the magic that Soren Wheeler wants for Radiolab stories?  What is the universal question you’re addressing? Bring all that back to your focus sentence and your XY, and build your plan to go forward. This is your path into more focused research and deeper interviews.

In our next episode, Walk in my Shoes, we delve deep into characters. We’ll learn about what makes a good character and how we can make characters that connect with an audience. Plus we’ll learn about how to make a story about animal conservation compelling, what Ron Paul can teach us about storytelling, and the unexpected consequences of a story about Ira Glass’s dog Piney.

In our second workshop episode we’re talking about some of the focus sentences and XY story formulae posted in the Out on the Wire working group. This week: stories about going over Niagara Falls in a barrel, self-help, comedy and PTSD, entrepreneurship, and a lot more.

Here are the story ideas we talked about on today’s show:

I try to become a stand-up comedian because I want to communicate how the world looks through a veteran’s eyes and show what PTSD is like to those who haven’t experienced it, but I’m pretty sure I’m going to fail as I have no experience in professional comedy and the topic may be too dark to translate into laughs.

I’m doing a story about me trying to do stand-up comedy and it’s interesting because I’m using it as a platform to discuss military veteran PTSD.

Focus: At GoBeCollective.com, I’m telling the story of how Creatives want to be seen in the marketplace, but often feel invisible. What’s interesting is when these Creatives discover that BEING SEEN happens in business only after they SEE themselves as business owners.

Focus: Annie Edson Taylor seals herself in a barrel and goes over Niagara falls BECAUSE she thinks if she survives she’ll be rich and famous, BUT even though she lives, no one really cares.

XY: I’m doing a story about Annie Edson Taylor, the first person to go over over Niagara Falls in a barrel and survive, and it’s interesting because she only did it out of desperation for money, but didn’t actually make any money from it after all.

Annie Edson Taylor is desperate for money AND THEN she decides to risk her life going over Niagara Falls in a barrel (which no one has ever done before) so that she might become a celebrity AND THEN against all odds, she does survive AND THEN you wouldn’t #$%&*! believe it but her manager makes off with the barrel, touring it with a much younger woman and claiming that it was she who went over the falls, and Annie spends nearly everything she made on private detectives trying to track him down, and ends up dying penniless anyway. And the reason that is interesting to every person walking on the face of the earth is that is perfectly exemplifies the ways in which life isn’t fair, that risk doesn’t equal reward, and that there will always be a man who steals your barrel, and a younger, prettier version of you to take your place.

Focus Sentence: Young Welsh musician becomes part of London  high society because of her ambition to become a well known composer, but on the cusp of greatness she dies on her kitchen table following an emergency operation by her unsupportive husband.

XY: I am writing a fictional story about a woman in her mid- twenties who is addicted to self-help books, gurus, and programs, and it is interesting because her life spirals out of control due to her addiction to bettering herself, which brings to light the universal question of discontent and dissatisfaction in most people’s lives.

Focus: Emma HAS hundreds of self-help books, she has a google alert for any new hot trend in the self-help industry, and she is determined to become the best version of herself BECAUSE she feels like she is missing the “how to live” map in her brain and believes she can find it in these self-help books, BUT in the process she destroys her health, finances and relationships.

XY: I’m doing a story about one family’s harrowing, heartbreaking and even hilarious journey around the globe to find a cure for their son’s (brother? grammatical issues here!) mental illness and it’s interesting because…who said there was a cure?

Focus: One family travels the globe in search of a missing son/brother and a cure for his bi-polar illness BECAUSE they’re desperate to get him back to ‘normal’ BUT there are no simple solutions….and what is ‘normal’ anyway!

XY: I’m doing a story about a new nurse on an AIDS care unit in the 1990’s and it’s interesting because she becomes an artist along the way.

The Soren: MK’s dad died while she was in nursing school. Then she went into to AIDS care so patients wouldn’t remind her of him. Then she started painting wooden boards to memorialize her dead patients. Then she became friends with a patient who was an artist, a painter, then you wouldn’t f***ing believe it but this but she had an accidental needle stick while caring for him. The reason that this story is important to every single person walking the face of the earth is because we all deal with loving and losing those around us and we are all taking turns being sick and there’s no real divide between a patient and a caregiver and, it turns out, art can help us. As the poet Marie Howe said, “Art can hold it.”

Links to other things we talked about today:

Epileptic by David B