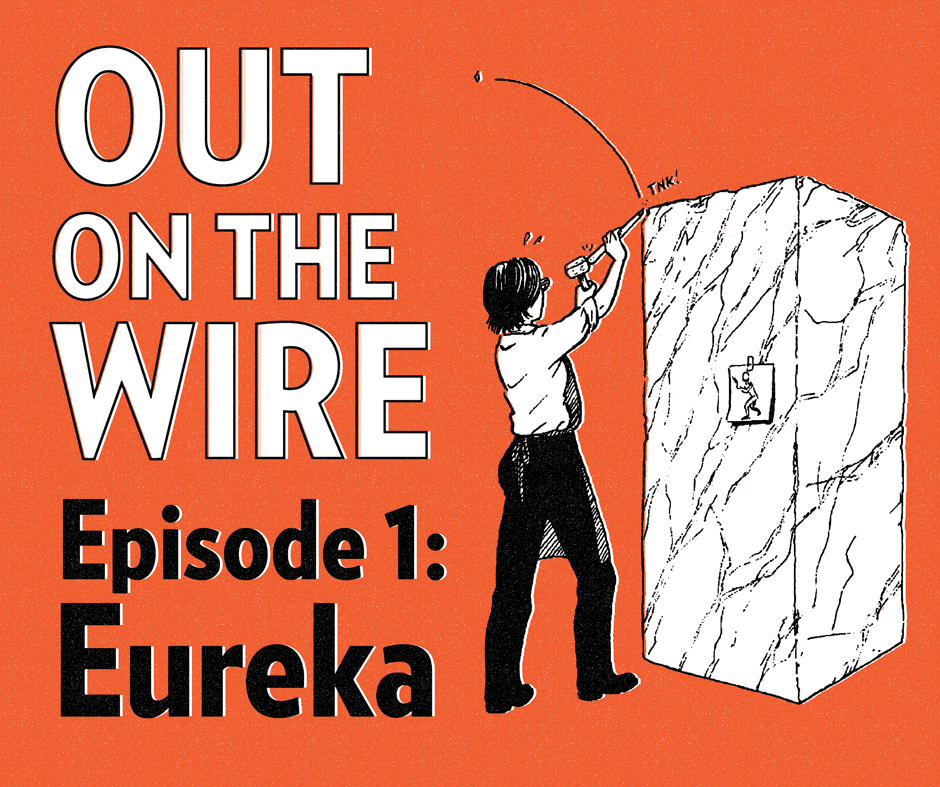 Out on the Wire is the show about making stories, step by step. Join cartoonist Jessica Abel as she breaks down the principles of storytelling and puts you on the path to crafting your own story—in prose, comics, audio, video—in any narrative art form, fiction or nonfiction. Featuring radio and podcasting star producers from This American Life, Radiolab, Planet Money, Snap Judgment, and many more. Listen, learn, and collaborate with us at jessicaabel.com/podcast to make something great.

Episode one is about ideas. We investigate how to find them and how to follow your taste with the help of Ira Glass, Alex Blumberg, Stephanie Foo, and more.

First, let’s go over how this thing works. Every week we pick a storytelling topic, like finding ideas, characters, or creative crisis, and I break down that topic using the never-before-heard audio I recorded during my Out on the Wire book research. You’ll be hearing from producers like Ira Glass as well as voices from Planet Money, RadioLab and many others. I believe that there are tools and strategies that are useful for all types of narrative media, for fiction and non-fiction, comics, movies, documentary radio, any medium you can imagine. We’ll be exploring those strategies, and at the end of each episode I’ll challenge you to put the things we’ve learned into practice.

We’ll have a new episode every two weeks, and in between, a workshop episode, recorded live, where Ben and I, with Matt Madden, discuss some of the most interesting material posted in the community during that week.

This week we talked about ideas. How to find them, and how to follow your taste. You heard interviews with Ira Glass, Jay Allison, Stephanie Foo, Alex Blumberg, and Jenna Weiss-Berman.

Here’s a transcript of episode one, it’s adapted from our scripts so it’s not quite perfect, but it should be useful if you’re looking for a written version of the show.

You never know what your stories will lead to

Learn more about how I first started working with Ira Glass and the deep origins of Out on the Wire, check out my new blog post How Jessica Met Ira, featuring a story I drew for an alt-weekly newspaper back in the mid-90s.

Your mission is to write up a short, one-paragraph description of your idea. Do not ramble! Just write what’s intriguing about this idea, and what directions it’s leading you in. What is starting to stick to it?

Also: name your medium. What are you intending to do with this idea? A fictional short story? A nonfiction brick of a book? A 10-page comic? A short video?

Make as many notes as you can, but don’t go further. In the next episode, we’ve got a bunch of tools to assess and strengthen your ideas. We’ll poke some sharp sticks at them, and see if they hold water.

We’ve got a workshop episode coming to you next week.

And then after that, Episode 2: Focus. It’s a doozy, we’ve got a couple of killer tools for you: The focus sentence and the XY story formula.

Plus, a story from Ira Glass about a reporting trip gone sideways, a visit to the transom workshop, and Jay Allison’s “slow radio” philosophy.

THE GAP by Ira Glass from Daniel Sax on Vimeo.

Get the set of character prompts used to spark Trish Trash.

More about Trish Trash, including a link to a 10-page excerpt.

A post about the illustrations in Drawing Words & Writing Pictures I talk about in this episode.

A post about the many many (many) stages the Trish Trash cover went through.

In our first workshop episode, we take a crack at some of the great ideas popping up on the Out on the Wire Working Group. Join Jessica, Ben, and Matt as we dig into how to make your story ideas stronger.

Here are the story ideas we talked about on today’s show:

I found this old notebook at a yard sale, i liked it so much it was given to me for free. I believe its an old autograph book of a young lady named Emma in 1890-1 New York.

It is very fragile and falling apart. Only a few of the pages have little(very hard to read) notes on them, otherwise it is mostly blank. Theres a little sketch too (see images) and stickers.

I think the format lends itself nicely to a strip. I’d like to fill some of the empty pages with an exploration of who Emma may be, and could she actually have been Lilian? Or somebody else?  was she gay? potentially to be made into a little zine later.

I am an illustrator, recently enrolled in MFA in comics program at CCA. I have never really written fiction and I just recently moved from New York to SF, where I found this little object. I think it can make a nice little side project while I work on my thesis and other things.

A woman who runs a horse sanctuary seems like the last person you’d expect to want to bring back horse slaughterhouses to the U.S. But the current regime—where horses bought across the U.S. are crammed into trains with little food or water for a long journey to the abbatoirs of Canada or Mexico (which are often facilities designed for cattle, and not horses), may be perpetuating more cruelty than animal advocates intended when pushing to ban the practice*. Meanwhile, wild horses in the U.S. are overpopulated way past the point of sustainability, while horse sanctuaries cannot keep up with housing unwanted animals, domestic or wild. “Horseflesh” is a medium length (i’m thinking 25-40 pages) nonfiction comic exploring a knot of curious ethical, scientific, historical, and culinary issues surrounding horse meat. Can we give horses a good death?

*the ban was lifted a few years ago, but is still basically in place because the fed gov’t will not fund inspections of horse slaughterhouses, without which they cannot operate.

AmagansettLand is a podcast from the local library. Besides offering live recordings of authors and interviews with authors, it is also about place. We are in the Hamptons, but we are also a small town.

I want to develop local stories that highlight the diversity out here. We have farmers and surfers and fisherman and Rolls Royces and homeless…

This week a friend and I were on the phone and I heard the train go by, but the distortion made it sound like an ominous giant dog or monster. He was standing in his yard which is only a stones throw south of the tracks. He told me that he’s noticed that the different conductors play with the horn and make different combinations.

In keeping with the idea of paying attention – this has stuck with me.

I want to play with this germ to see if I can make something that is not the usual cliche about the other side of the tracks, etc.

The Long Island Railroad runs the length of the island and divides the communities along class lines – those south of the highway and closer to the ocean are the wealthier. We have such extremes of wealth and poverty out here.

One of my current ideas  begins with Jean-Baptiste Lamark.

He did some incredible and fundamental science in the early 1800s. But most people (if they have heard of him at all) only know him for one reason; he got evolution wrong. Lamark thought that the characteristics you aquired during your lifetime could be passed on to your children (think giraffes evolving because they constantly stretched their necks to reach high leaves). Darwin comes along and sets us straight with natural selection.

Fast forward 200 years and it turns out maybe Lamark wasn’t so wrong after all. The field of epigenetics is showing that some aquired traits can be passed on to offspring (e.g., grandchildren of people that experienced PTSD have chemical/hormonal signs of being stressed despite living normal lives). Your experiences (and not just the genes you inherited) could affect your great great grandchildren in ways we never dreamed possible. Some predilections or phobias you have in your own life could be the result of things your relatives experienced 100 years ago or more.

Other things we talked about today:

If by Sherre Delys and John Jacobs

Leaving your Lamarck from Radiolab

24 Hours at the Golden Apple from This American Life