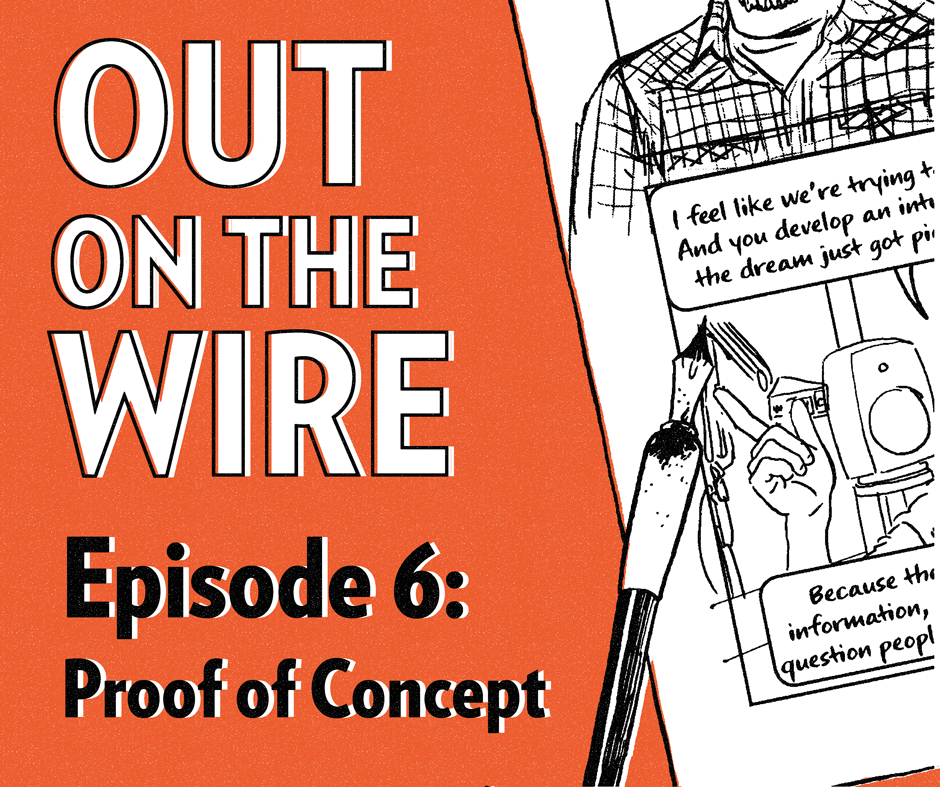 It’s time to get some ink on that page. We’re in the lab, testing our story hypotheses in the crucible of the writing process. We put things in order, break them down, build them with little blocks, iterate, signpost, and answer the question, “what does Buffy feel?” With the help of Ira Glass, Joe Richman, Soren Wheeler, Glynn Washington, Sean Cole and more.

If you’re looking for a written version of this episode, you can find our transcript here.

Mo’ Better Radio by Ira Glass (Article from 1998. Best part: where the intro says, “By last fall, the show’s weekly cumulative audience had grown to 565,000, according to PRI.” I love that. There was a time when even Ira Glass was just starting out.)

Interviewers on Interviewing from Hearing Voices

Love Is a Battlefield from Transom.Org

Write a scene. It can be any scene, it doesn’t have to be the first scene in your story. But if you’re posting to the Working Group, make it a short one.

Whether or not you’re working along with us in the Working Group, here’s what you want to do:

Is there a chronology to rely on? great. Start with that. If not, put your ideas or bits of tape in an order that builds from individual elements to coherent argument.

Write it, then iterate it. Read it out loud to someone and get feedback. Record it, then listen on your headphones while taking a walk. Rewrite.

Then check it against your hypothesis. Does this scene change what you understand about your story?

Post your scene on the Working Group and get feedback from us.

In our next episode, Episode 7: Dark Forest, we’re wandering deep into the woods. It’s scary, but with a little help we’ll all make it through to the other side.

This week, Matt and Ben and Jessica critique scenes written by members of the Out on the Wire working group. An ethnographic memoir about marrying into a new culture, a literary biography of a dancer who found success copying the competition, and in their stunning debut, the Out on the Wire Players perform a scene from a short radio play about an orange.

Stories we talked about this week:

It’s hard to imagine what my friends must have thought when I came back from Tanzania at the end of July 2009 and told them I was dating a Zanzibari man named Hamid.

“I know, right?” We laughed. I was surprised as them.

I broke the news of my new romance to my friends slowly. Did I call Hamid my boyfriend? I hate that word. I would have preferred the ambiguity of the Swahili mpenzi—boyfriend, girlfriend, partner, lover, beloved—but I was stuck using English with them. I definitely didn’t tell them that he was actually my mchumba—fiance. Despite having split up from Stan almost five yeas before, I was still waiting for my divorce to be finalized. Plus I knew my friends would think I was crazy to have agreed to marry a man I’d only known for two weeks. (That I knew they would find it crazy should have been a good indication that it actually was crazy.) As the Swahili say, “Akipenda chongo huona kengeza”—If one loves a one-eyed person, one sees only a squint. The Swahili equivalent of “Love is blind.” There was a lot I couldn’t see at that time.

I was most nervous about sharing my news with Susan, a friend with whom I’d had an on-again, off-again romance. The last time I’d seen her was the day before my trip, when she’d come for dinner. “Let me walk you to your car,” I said. My mom was visiting and I wanted a moment alone with Susan.

In front of the palm trees and flowering birds of paradise on the lawn of my apartment building, we hugged goodbye. She joked, “I just want to throw you down on the sidewalk and have my way with you.” I think we both had a small glimmer of hope that we would try dating again when I got back. But just a few weeks later, Hamid had plunged into my life, and now I had to figure out how to tell Susan.

It was early August when I sat on her couch with my feet folded under me, a glass of red wine in my hand, and said, “I met someone in Zanzibar.”

“I knew it!” she said. “Something you posted on Facebook made me wonder.” She took the news in stride, asking me questions about how we’d met and what had happened. Today I wonder if she was also hiding her real feelings about the news, but that night I was simply relieved that she wasn’t upset. She even seemed supportive. I didn’t tell her that Hamid and I were already engaged, but she knew that in most Muslim cultures people don’t date before marriage. “Do you think you’ll get married?” she asked.

I was vague, but I think I said we probably would eventually.

“And will you convert to Islam?”

“I don’t know,” I told her. “He wants me to, but I need to read a lot more about it before I’d feel ready to do that.” We talked for another hour, finishing off a bottle of wine.

At the end of the night, she summed things up: “Wow,” she said. “It’s like you’re marrying Africa.”

She’d been having quite the week. The judge had decided in her favor, telling Colonel Henry Savage that owning the rights to the Merry Widow operetta didn’t mean he could stop her from spoofing it in her act. With Max’s music history in her back pocket, she’d testified that even Savage’s score was itself a borrowed work. Now Willie Hammerstein asked her up to his office, where he and Gest shared their plan. She would sail to London to watch Maud Allan dance Salome at the Palace. Just like the Merry Widow’s waltz, she could recreate Allan’s Dance of the Seven Veils. It was a surefire sensation, Gest said. You can play the Roof Garden – Hammerstein gestured toward the ceiling – all summer long.

“For a thousand dollars a week,” she said.
Hammerstein hedged. It was a lot of money. He turned away.

Hoffman took stock of her situation. She wasn’t as highbrow as Isadora Duncan. She had name recognition, though, and a stage manager’s eye for all the little details that made a number. A week of performances, maybe two, and she’d be able to recreate it to a tee – no, make it better.

“Twelve fifty a week,” she said. “You should have heard me the first time.”

Five days later, she and Max boarded the steamer Kronzprincessin Cecile en route to Southampton. She was twenty-three, and she was going to bring Maud Allan’s dance to New York before Allan got the chance.

In our next episode, Episode 7: Dark Forest, we’re getting lost and found again in the deepest darkest part of the creative process. With more exclusive interviews from Robert Smith, Zoe Chace, Jay Allison, Ira Glass, and more.