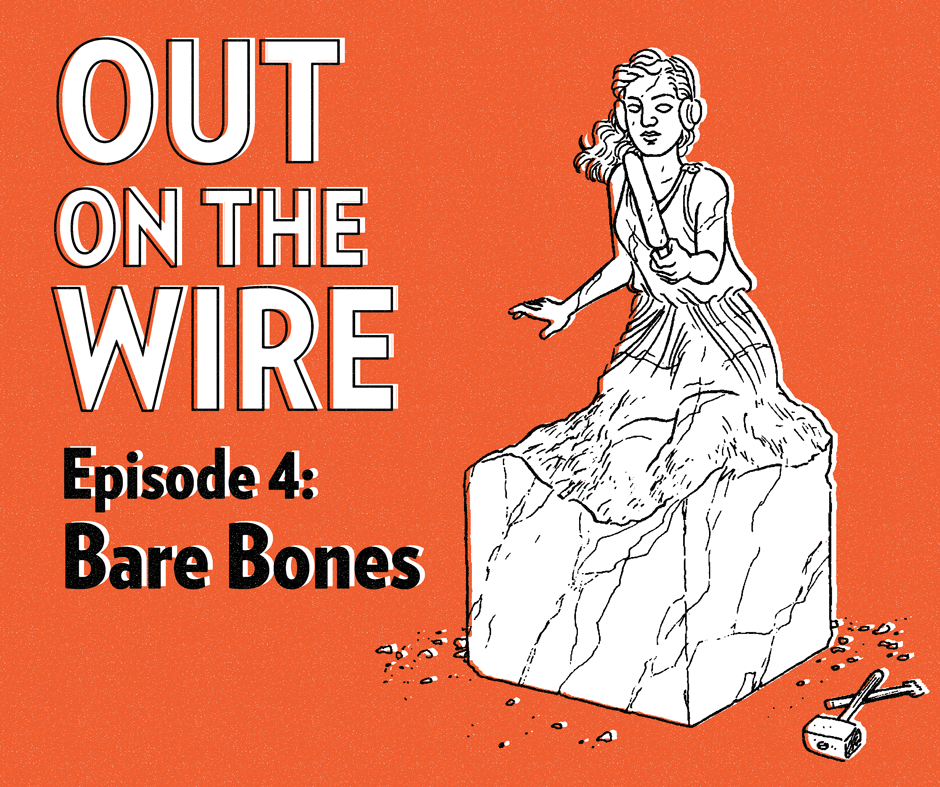 This episode is a flight check: We’re making sure the underpinnings of our stories are tight and structured by utilizing the narrative arc, chronology, and framing. You’ll hear from Ira Glass, Chana Joffe-Walt, Sean Cole, and in a brand new interview, from Jonathan Mitchell of the radio-drama podcast The Truth. Jonathan explains his storytelling philosophy and breaks down the creation of one of his stories, “Naughty Or Nice.”

We also provide a written version of the show adapted from our scripts. You can find this week’s transcript here.

(I’ve talked about this book 3 times already. You might want to get a copy.)

The Truth: Naughty or Nice

Get your ducks in a row: Do a Story Madlib.

but then this happens, and so he has to do this….

And therefore, this…which leads to this…and finally, you won’t believe it, but this…

And the reason this matters to everyone walking the face of the earth is THIS.

Remember, as you lay out the chronology, to focus on conflicts, turning points, moments where there is a dilemma. If you’re missing hunks in the middle, that’s OK. Get as far as you can.

…and that last bit is for everybody. You want to check yourself now. Are you making a story that’s just weird or exotic, or does it have something larger to say back to the world?

If you’re making a character-centered work, you additionally want to make sure you’re clear on two things:

If you’re working in nonfiction, you may not know the answer to those two questions before you interview, but you can certainly identify the options.

In our next episode, Episode 5: You’re Not Lucky, You’re Just Good, we’re talking interviewing and research. How can you get the best out of a subject? With more exclusive interviews from Robert Smith, Zoe Chace, Jay Allison, Ira Glass, and more.

In this week’s workshop, we’re critiquing work from the Episode 4: Bare Bones challenge: stories of a modern Cinderella, a veteran seeking justice, and an antique dealer with attachment issues. Plus we riff on the idea of theme and how to do advocacy storytelling without preaching to the choir.

Stories we talked about this week:

FOCUS:
Ashby the stubborn antiques dealer goes on a journey to track down the manic marketing guru he hired who stole the one item in his store that wasn’t for sale. But the more he uncovers about her life, the more he begins to understand his own life. (Ok, I despise that last sentence. When people tell me their ideas about “life,” I’m always like, “Give me specifics!”)

XY:
I’m doing a story about Ashby, an antiques dealer with declining sales because of his attachment issues. (If he had been a character in Forrest Gump, he would’ve told Forrest “seat’s taken” not because he was a bully, but because he valued his personal space over inclusiveness.) It’s interesting because when he finally opens up to the idea of change and hires someone to help with marketing his wares, she ends up stealing the one object in his store that’s most precious to him. His attempt to track her down leads him on a journey as much through the physical world as through new-agey self help, lucid dreaming, and his own struggles with mental illness. (Again, I think that last sentence is hogwash. Needs specifics and I need to get a better grip on Ashby’s interior struggles.)

MADLIB:
Ashby is motivated to track down this manic stranger who he believes stole something from him. He discovers she skipped town, and no one takes him seriously, not even the authorities, so he takes matters into his own hands (vigilante justice!). And therefore, he tracks her (with his nonspecific set of skills). The more info he uncovers about her life leads him to serendipitous analogs within his own life. He begins to believe in big ideas like “fate” and “destiny.” And finally, you won’t believe it, but he finds her in Venice at one of the lowest points in her life. And, oops, she doesn’t have the thing. And the reason this matters to everyone walking the face of the Earth is we all often desperately search for that one thing that represents our identity more than anything, that one thing we cling to most, only to discover that we have to learn to live without it.

Stacy Little is a motherless teenage outcast who dreams of being a fashion designer because she wants to escape the small, provincial city where she has lived in lonely poverty with her distant father.

But then she meets a bunch of eclectic middle aged women at a local sewing group, and they force her to actually try to achieve her dream.

Therefore, Stacy starts making a dress that she can enter in a regional design talent competition, where the winner gets an interview at a design school in London!

This leads her to start spending more time at the sewing group. The women help her by contributing fabric, skills and encouragement, but they don’t know that she is skipping school.

Then the night before the competition, her father finds out she’s skipping school and grounds her. So she can’t enter the competition and she’s back to square one!

Then the sewing ladies actually talk to Stacy’s father because they are worried about her.

Finally, you won’t believe this, but Stacy’s father actually sits down to talk to her for the first time in years and gives her a new sewing machine! Stacy decides to apply to the local art school and goes to personally see the lecturer with her portfolio. She finishes her time at high school by wearing the dress she designed to prom, holding her head up high.

And the reason this matters to everyone walking the face of the earth is that most of us hesitate to act on our dreams and sometimes you need other people in your life to see your potential before you see it yourself, and these people can help you to grow into your own hero (or heroine) and believe in yourself.

The spark is meeting the women

The dilemma is whether to just try to blend in with the people around you and accept where your life is going, or try to do something risky and different where you might fail.

Brain-injured Vietnam vet Ronnie Murphy, a Native American who fought for his country as a teenager and lost his future, is motivated to appeal a case of mistaken identity with the Veterans Administration because it has led to his losing over $70,000 in disability benefits.

The VA insists that Ronnie was wanted on a fugitive warrant for several years back in the 90s, and was overpaid because he was ineligible during that time. But that was another guy with the same name and birthday but a different Social Security number.

But then his appeal is denied, and so he has to hire a lawyer, who eventually gives up, and other lawyers refuse to take the case, so he writes to his congressperson but that goes nowhere….

And therefore, he contacts a local radio station…which leads to his being interviewed on the air…and finally, you won’t believe it, but the talk jock, who had promised to keep Ronnie’s case in the public eye, mysteriously drops the story like a hot potato without explanation.

Ronnie is now in his 60s and has health problems. Will he even live long enough to see justice? His final appeal has been stuck in Washington for over three years now.

And the reason this matters to everyone walking the face of the earth is because JUSTICE. We need to be able to trust government to treat us fairly, and that people in power will keep their word about helping us when things go wrong. But we know that’s not always true, so it’s important that we can trust the system to provide little guys like Ronnie with a way to right wrongs.

Links to things we talked about in the show:

Naughty or Nice from The Truth

In our next episode, Episode 5: You’re Not Lucky, You’re Just Good, we’re talking interviewing and research. How can you get the best out of a subject? With more exclusive interviews from Robert Smith, Zoe Chace, Jay Allison, Ira Glass, and more.

Find us elsewhere on the internet: