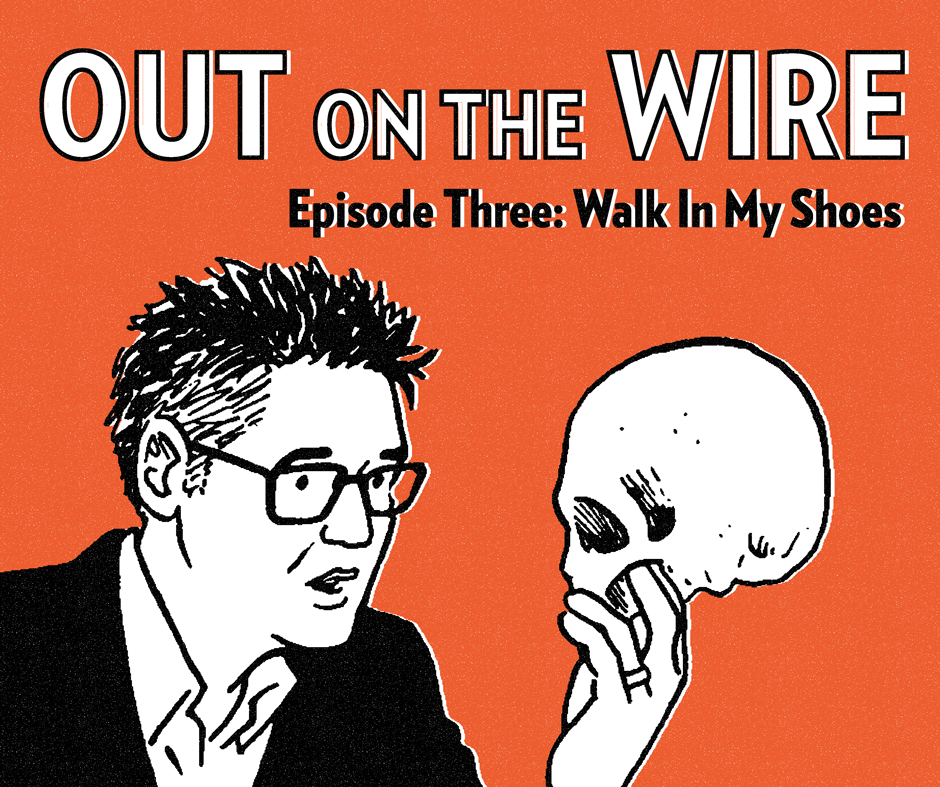 Today we dive deep into character, characters that let us walk in the shoes of someone else. But how can we create characters that feel genuine while also functioning to move the story? Glynn Washington, Joe Richman, Ira Glass, Jay Allison and more are here to help us figure out how to make characters that connect with an audience.

If you’re looking for a written version of this episode, you can find our transcript here.

Lions from One Species at a Time

Imagine For a Moment from Ron Paul

This 14-Year-Old Girl Just Bought A House In Florida, from Planet Money

(More than) 20 Questions for Characters worksheet

Click here to open it and save your own copy.

Your mission this week is to create a profile of one or more primary characters in your story.

I need you to make some hard choices, and write up just a couple of sentences about the character, detailing only whatever backstory is absolutely necessary to make your story work, and NO MORE.

If you’re doing non-fiction, write about your character as if he or she were fictional. Make up the things about your character that you hope to find in real life, that would make your story awesome. But then, please, be prepared to chuck all this and be surprised by reality when you actually sit down with him.

Below I’ve posted a handout that I use in my classes called “(More than) 20 Questions for Characters,” that comes from that very same chapter in Drawing Words & Writing Pictures, my textbook, as the original Trish illustrations that sparked the whole saga. In fact, it’s part 2 of the same activity as the spark cards I used to create Trish in the first place.

It’s a kind of worksheet, to help you think through some of the things you might need to know about a character, and to run the character through her paces a bit, with questions designed to evoke stories. Treat it as a starting point, answering whatever questions are useful, adding some new ones that I hadn’t thought of.

But this work, and this worksheet, is just for you: I don’t want to see the full run-down. Just the few details from the backstory needed to make the story work.

In our next episode, we’re talking structure. How can you construct a story that propels the characters forward? With a new interview from Jonathan Mitchell of the great radio drama podcast, The Truth.

Workshop Episode 3.5: Walk In My Shoes

In our third workshop episode we critique a few of the character profiles posted in the Out on the Wire Working group. This week: stories about Lithium mixers, a future detective noir, a sci-fi allegory about identity, and the true story of a transgender woman’s journey at an Orthodox Jewish university.

Here are the character profiles we talked about on today’s show:

Focus Sentence: Sidney Koizumi, a private detective working in a dystopian Los Angeles a hundred or so years in the future, accepts a commission from a domestic servant who is looking for a troubled young girl she raised for many years. Sid accepts this job because times are hard and she needs the money, and also because she identifies with the missing girl and the mental and social problems she is going through, but as she searches for and then finds this girl and the truth behind her, Sid finds the two of them embroiled in an assassination plot, a political battle between the licit and illicit powers in the city, and the individual struggle to find and create your own personal niche in a turbulent and violent world.

Profile: Sidney (Sid) Koizumi is a 32 year old half-Asian half-Hispanic private investigator, living and working in the run-down outskirts of Cal City (which is, itself, an amalgamated mega-city encompassing most of central and southern California). She is average in height and heavier in weight, taking after her father’s solid physique, and has short black hair that is more often than not pulled back into a lazy ponytail for simplicity.

She was raised by her father, a blue collar worker and (reluctant) community organizer, who was killed in gang-related violence nearly a decade ago. Her mother, a beautiful, intelligent woman, has significant issues with drug and alcohol addiction and was in and (mostly) out of Sid’s life as she grew up. She leveraged her father’s reputation and contacts to help start her business at the beginning of her career as a private investigator, and has since built her own network of contacts and acquaintances all across the city.
Like her father, she is quiet and reclusive by nature, does not have many close friends, and often spends her evenings in the same bar that he frequented on a regular basis. She is not anti-social though, and has friends and a few lovers spread throughout the city, but is inclined to seek out quieter ways to spend her off hours in contrast to the social chameleon she is required to be in her job. Also like her father, she’s not one to pick a polite word when an impolite one does the job better.

Profile:Joy (then named Jay) didn’t think there was anything unusual about her until the first day of kindergarten, when she arrived at the schoolyard and ran over to play with what she saw as her natural peer group – the girls – only to be greeted with disgusted cries of “Eurgh, it’s a boy!” This was her first lesson about gender, and it set the tone for how she thought of her own gender identity for the next fifty years: as something horrifying that she should be ashamed of and keep hidden.

Instead of exploring this, she focussed on another part of herself: her Jewishness. Unlike being “male,” being Jewish was a category she understood and felt at home with, even though she grew up in a secular household. Her religious faith and her passion for Jewish history and literature developed into a career as an English professor at an Orthodox Jewish university in New York. There she met a woman and fell in love – and when, a few months into their relationship, Joy told her: “Sometimes I feel like I’m a woman,” her girlfriend replied: “Feel like a woman? What does that mean, to feel like a woman? Most of the time I don’t even feel like a woman.”
They got married, had three children, and began a family life that was both happy and sad, full of love and full of imperfection. Joy went through periods of deep depression, times when she felt like she didn’t really exist and was dissolving inside her own skin. She couldn’t get rid of these two fantasies that repelled her and obsessed her in turn: one was killing herself; the other was becoming a woman. At the point when I’m picking up her story, Joy is in her mid-fifties, and after one of her darkest periods of contemplating suicide, she’s just made the decision to transition genders at last.

Focus: In a futuristic setting where identity is malleable, a rich, white hetero male is able to remove from himself all the markings of his class and identity in order to become completely anonymous for some illicit gain, but when he does this, he loses all of those markings and finds himself outside of the privilege that he was born into, and must struggle to regain them or learn what life is like without them.

Profile: Jeremy Crucible is a young, self centered, upper-middle-class white man that was born into his comfortable life, and who never had to work to attain anything, So consequently, he never works to better himself. He is bitter that he doesn’t have more, and laments his station in life, thinking that he deserved better. He feels that others have it better than him, and fails to recognize just how nicely he has it. He can be a bully at times. He doesn’t like to see anyone bring up social issues, as it causes him to react like “oh yeah? what about ME? what about MY problems?” He’s pretty much a jerk all around. As Jessica Abel put it, “He’s no Luke Skywalker.”

Profile: Julia is a writer who noticed the usage of lithia water as a common mixer with whiskey in a James Joyce story. Julia was surprised at the notion that common mixers could change with time – perhaps an obvious concept but one she never gave much thought to – and remembered reading that lithium, and in drinking water, improved several measures of mental health. Julia – a history major, mental wellness proponent, and whiskey drinker – wanted to explore what the changing status of lithia water throughout the late 20th century says about our drinking culture and use of chemical elements as medicine.

But I didn’t really like being the focus, so I wrote another one, using my object as the character:
Lithia water is mineral water that contains lithium salts. It was hugely popular in the early 20th century due to acclaimed health benefits. Demand for lithia water outgrew what the few natural lithia water springs could produce, and companies started to infuse regular mineral water with lithium. Lithia water also became widely used as a mixer and a cocktail ingredient. The FDA started clamping down on lithia water’s claims (from treating kidney disease to impotence to keeping “the blood pure”), effectively ending its popularity. Lithium was widely accepted as a psychiatric drug by mid-century and decades later, lithium in water was found to have positive health effects. Unfortunately, it was no longer on the American mindset or taste palate. Lithia water’s hyperbolic marketing made it successful but ultimately became its downfall. The FDA was still rallying against their claims as late as 2012.

Links to other things we talked about today: