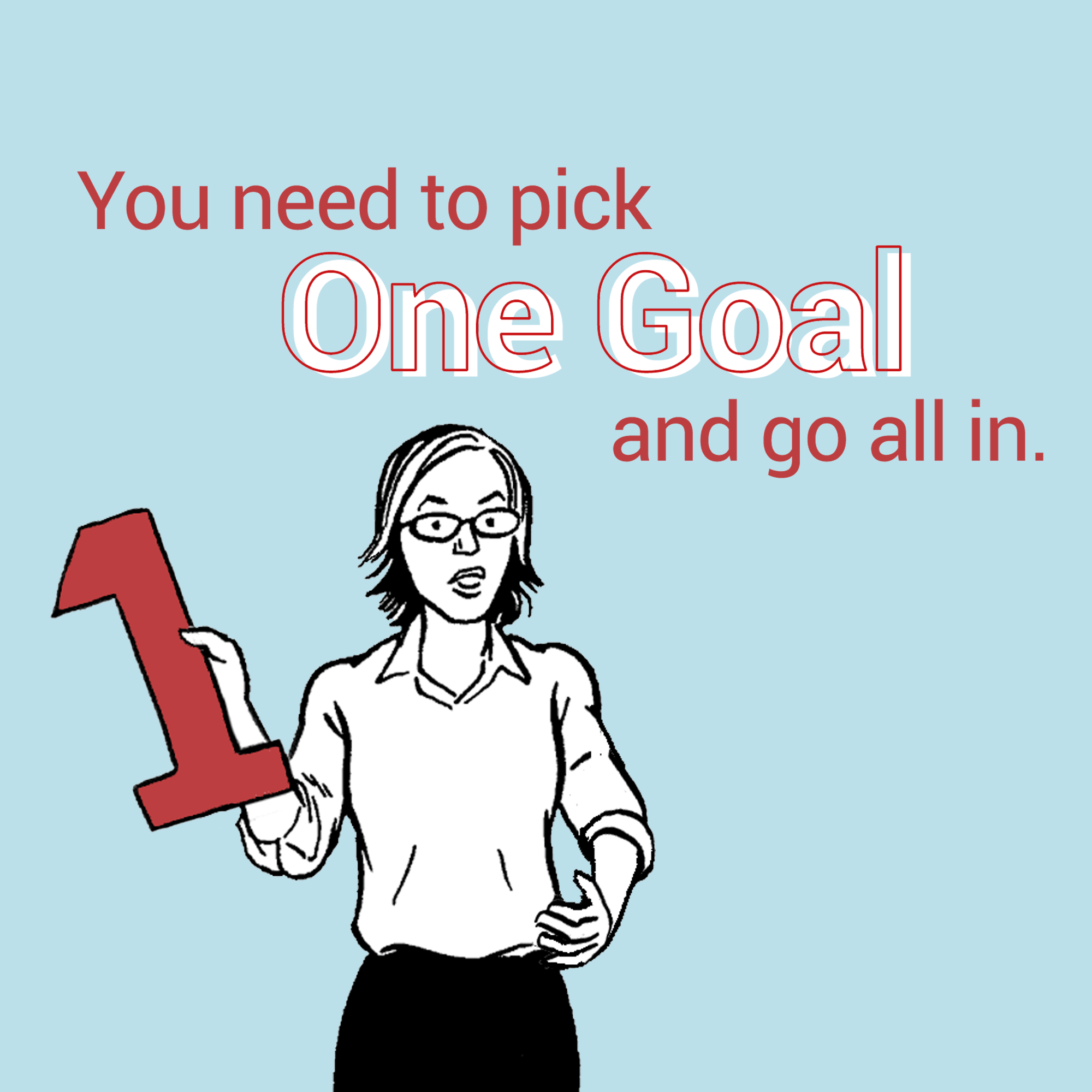 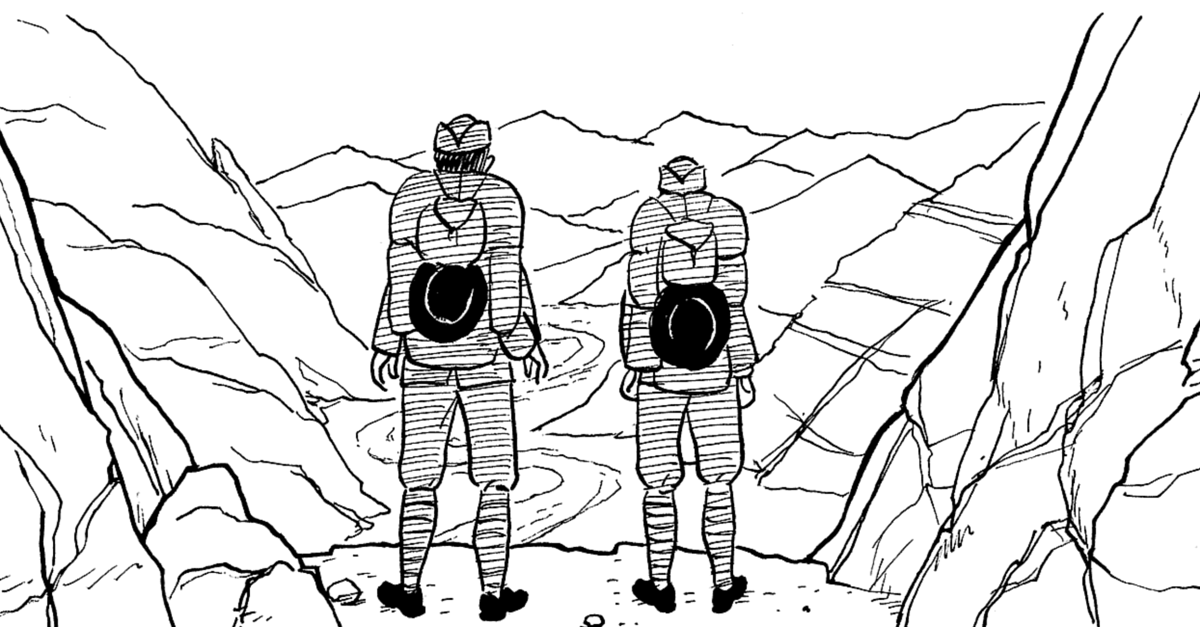 Finish what your start so you can move on to the next thing. Focus on one goal at a time.

In my article about Idea Debt, I told you to stop dreaming so much, and get doing. It’s important to finish what you start. But just for a minute, let’s dream together.

Imagine you figure out your schedule, and realize you have maybe eight hours a week for creative work outside your day job, if you’re careful. You have eight projects. So you put in one hour on each. Seems logical, right? But really: How deep are you gonna get? How far are you gonna be able to move that needle? Will you be able to finish what you start?

Now, imagine you spend eight hours over the course of a week on one project. You might get a whole chapter drafted in eight hours. Stranger things have happened. And if you’re spending chunks of time all week on the same thing, your brain is going to be working overtime on it. When you’re in the shower: brainstorm. When you’re in the car: things are clicking together. Have your notebook or voice notes app handy. You will have ideas. I guarantee it.

And if you follow this pattern for—depending on the project—between a month and a year or so: the thing is done. Actually done. You did it. Good lord. Imagine the party you’d throw to celebrate that.

What would it be like to have a big thing completed and in the world? What would that do for your self-esteem? How might it connect you to other people? What kinds of professional opportunities might come up as a result if you finish what you start?

…And if in this whole exercise, you were flitting between imagining one big thing on your list, and another bigger thing, and then how this third thing ties into your master plan, you got issues, babe. Because here’s the truth:

Too many projects = no projects.

Admittedly, I have the same issues. I know whereof I speak. I have a million things going on, and I feel harried and just busy all the time. It sucks. And worse: it’s not effective. Take Trish Trash, for example.

Trish Trash: Rollergirl of Mars is my sci-fi graphic novel about a 15-year-old girl who wants to be the number-one derby star on Mars (because, of course, roller derby will be the #1 sport of the future. Natch.). The first volume of Trish will come out in the US in November, which is really exciting. But I started this book in 2007. Actually, it was Christmas of 2006. By the time the three parts of the story come out, it will have been cooking for 10 years.

Why has it taken me so long? Well, the pages take a long time to draw, yes, and writing the script is demanding. But the real reason is illustrated by today, right this moment: I’m writing this article on a day when I also plan to lay out 2 pages of volume 3 of Trish Trash. But if I were not writing this article, I could lay out at least 6. If I were not doing all the other projects on my docket, I’d lay out 12.

And what would that have meant for me? I’d have a 200 page sci-fi book published, I’d have been building readership, possibly leading to opportunities to make derivative works (read: animation or film), certainly opening the door to sequels…and I also wouldn’t be drawing it now, when I’ve got other stuff I really want to be focusing on.

Focus on one goal at a time.

Sure, focus on one goal at a time.. Easy for me to say. But when your projects are your creative babies, when you’ve been carrying them all, in backpacks and in slings and on your shoulders and on your hip…sometimes for years on end, how do you make the decision?

Sometimes, you decide based on what will gain you small wins. If I sit here and get all the way through this draft right now, then I will have the satisfaction of getting this post out on time, and that will clear the decks to make it easier to concentrate on Trish Trash later in the week.

Sometimes, you make the decision around money. Even if I’d realized all this stuff back in 2007 (I didn’t. I’m slow that way.) I could not actually have concentrated on Trish Trash in 2007-8 because I was already in the midst of writing Drawing Words & Writing Pictures and then Mastering Comics, my two textbooks on comics. And I was doing that because I got decent advances and had to pay my bills. TT would not pay my bills until I signed a contract, and that wouldn’t happen until 2008. Decision made.

Sometimes, the decision is about developing something that feeds your future self, something that will take a huge time and energy investment, but that you know you’ll be proud of in the future, and it will create new opportunities for you. It will build a new road into the future.

That’s why in 2011, I took on Out on the Wire while still inching forward on TT. It added three more years to the timeline, but it was completely worth it to engage so deeply with great radio and podcast producers and to create a statement about building narrative that can form the heart of a new conversation with readers and other professionals.

It was worth it to me, but it came at a price. Trish Trash was a current, exciting project for me in the past. Today? I still love this book, but I finished it emotionally, mentally, three years ago.

Is that a price you’d be willing to pay?

Finish what you start.

Telling yourself that you’ll just do a bit on this thing and a bit on that, that you’ll fit it in, is a recipe for ending up with nothing finished. When you don’t finish, you end up feeling like you’re not working hard enough, so then you hate yourself a little bit, or maybe a lot. You blame yourself, and you say, I just need to work a little harder. But there is no bottom to this syndrome. There is no point at which you find enough time to do all the things, all at once.

Choose one thing and go all in.

Choose one thing and it’ll set you free.

You can move forward, and actually finish what you start … if you focus on ONE goal at a time, and march inexorably towards it.

You can find an expanded version of this article, as well as the accompanying activity, in my book, Growing Gills: How to Find Creative Focus When You’re Drowning in Your Daily Life.