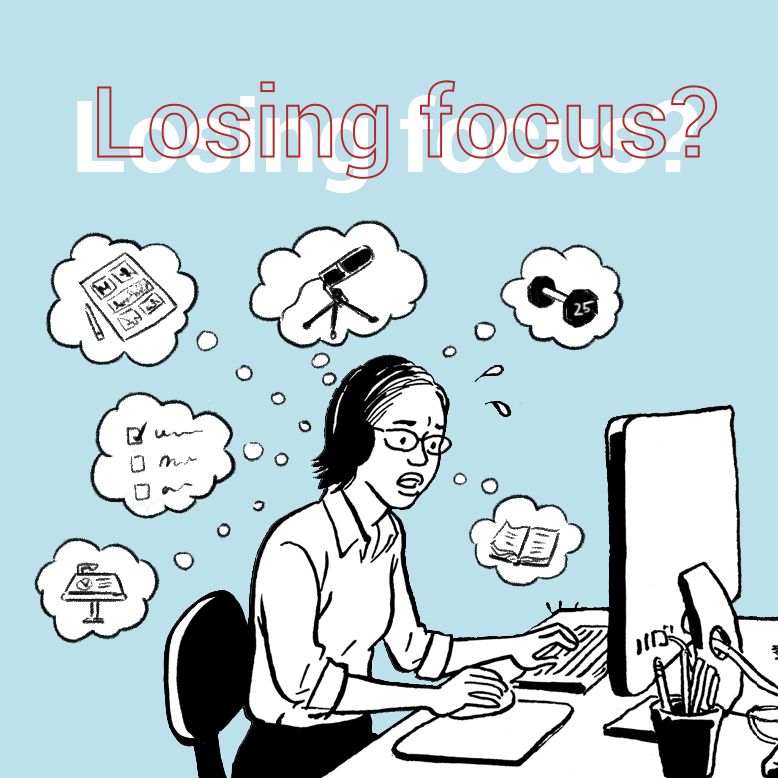 Losing focus? There are reasons you derail your progress

It happens every time

I get about two-thirds of the way through the Creative Focus Workshop with a group of students, and creaky, self-defeating patterns start breaking down.

People start to take action on projects that have been back-burnered for ages.

Stuff starts to happen. It was happening for Chris, who has wanted for years to make comics a central piece of what he does with his life.

So he starts actually gaining traction…and then some perverse part of his brain causes him to up and volunteer to run the fund drive and redesign the website for an organization he’s involved with.  Suddenly, he’s losing focus on his One Goal.

I had ideas, but I put it out to the group, first. And honestly? They surprised me with the variety of reactions they brought.

Heide said she’d been known to derail herself when she was facing success because it was too scary. When things go well, you start to wonder, what if this really works? Then what? And so to block out those thoughts, she overcommits herself to other stuff.

Limor went the opposite direction. When things go great in some way, she feels invincible and capable of anything. So sure, she wants to go dancing. Sure, dinner sounds great! And she takes on tons of projects because she feels on top of the world…and then she exhausts herself. “Rushing the success is a formula for disaster.”

Peter is totally overcommitted already, but when he was offered the chance to go to a conference that lined up with the direction he’s headed with his work, he jumped on it…even though preparing for it would be impossible under his current circumstances. “There was no void to fill, but I was putting more into it.” No matter how great the thing would be in theory, in practice, without the capacity, it undermines everything else.

Losing focus is an out

For me, when I’m working my way through a new project that has a lot of unknowns, I feel this kind of floaty anxiety…nothing overwhelming, but I feel like I’m on the edge of a void, I don’t know what’s gonna happen, I don’t know how it’s going to turn out. So I’m looking for an anchor.

The anchor I often grab is doing work that helps other people quickly, so that they shower appreciation on me.

Chris is volunteering his very valuable skillset. His people are going to say, Chris, you’re awesome! Thank you so much!

Not only that, these are projects with deliverables and a clear end. He hits his fundraising goals. He finishes the website. These are self-reinforcing projects, designed to make Chris feel important, cared for, and competent. Which he is!

But maybe his comics don’t make him feel that way.

The hardest thing for me to deal with when I left full-time work back when I moved to Mexico in 1998 was no longer having people around to think I was awesome every day.

No one appreciated what I was doing. My comics took months to make and publish, and then I’d eventually get a few fan letters, one or two reviews…whereas my job had offered an immediate feedback loop.

This all comes back to scarcity. When you’re (that is, when I am) used to being busy all the time, but then you simplify your obligations so that you have open time to work on a big, ambitious project—work that doesn’t always feel great, or all that “productive”, since sometimes you just need to sit and bang your head against it for a while, or take a walk, or take a nap (all legit parts of the creative process)—you’re going to see those hours as “available” even when they’re not.

When you typically arrange your life so that you have needed social reinforcement for most of what you do, and then you take time out to do what only you know is important, you’re going to see that work as less valuable.

I asked Chris if any of these descriptions rang a bell, and he answered, “I agree with everything everyone said.”

So if you find yourself stuck in a cycle of making progress on your work, losing focus, then slowing yourself down (or even sabotaging your progress) with shiny new projects, or too many obligations, or work that offers an immediate ego boost…don’t blame yourself. It’s a completely natural reaction.

If you can become aware that you’re playing out this scenario (again?), then you are in a better position to observe yourself with detachment, and make a different choice.

Put a system in place where you’re not allowed to make a decision—yes OR no—for at least one hour after some opportunity comes up. And then make sure you actually look at your calendar before you make your decision. Are there open gaps, hungry to be filled? Or is that time the time you promised to your project?

Make the hard decision to allow yourself to live with the not-knowing about your work for a while.

If you can only stand it for a few minutes, that’s OK. That will still help you keep going, which is what really counts.

(For more on scarcity and what it does to us, here’s a book I can’t recommend more highly: Scarcity: The New Science of Having Less and How It Defines Our Lives (aff link), by Sendhil Mullainathan and Eldar Shafir.)