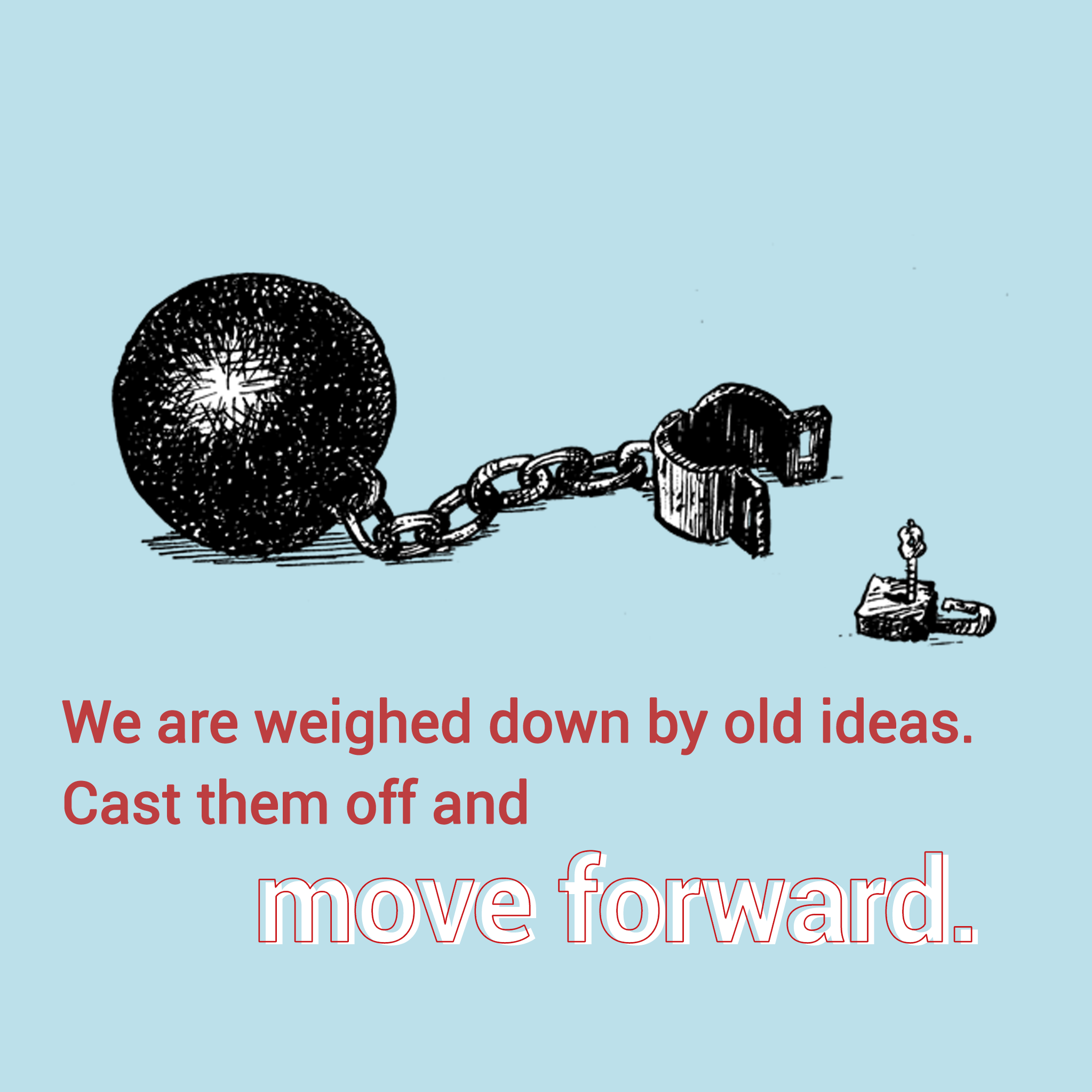 Idea Debt: You probably have it (and how to ‘cure’ it) 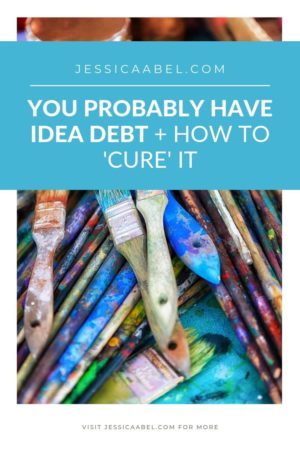 If I said you had idea debt, would you roll your eyes and change the subject? Or shrug because you don’t know what idea debt is in the first place?

Allow me to explain.

Do you have a big creative project in store? Do you lie awake, thinking about what might go into it, what the characters or environment might look like, how it will touch the audience in a whole new way? Can you imagine what it will feel like to have this project under your belt, and what kind of effect it will have on your life?

Let me tell you about Forest Lords.

Forest Lords is a series of ten fantasy novels, each a 1000-page brick, about the epic adventures of Greenleaf Barksley, elf proletarian, and his journeys to attain the Golden Leaf and save his homeland from the scourge of the Curse of the Titaness Denox.

The thing is, none of this series exists—not even Forest Lords Volume One: The Elven Soul. There are binders and binders of “lore.” There are a hell of a lot of character designs (that look suspiciously similar to Elfquest characters).

There is the vivid, lively picture the putative author has in his head of how it’s going to feel to write a fantasy series that has everyone panting for the next book or movie or TV show.*

But there is no book. There is only Idea Debt.

*(As a matter of actual fact, there are no binders either. This concept was invented by Benjamin Frisch when he was a snotty teen to poke fun the massive Idea Debts being racked up by others he encountered in the comics scene.)

What is Idea Debt?

I got this term from Kazu Kibuishi when I interviewed him for Out on the Wire episode 7: Dark Forest. His name for the concept was new to me, but it solved a huge problem: what to call this struggle with creative sunk costs that I understand all too intimately. Here’s Kazu:

You have this dream, this idea, of this awesome thing for years you think, oh I’m going to do this epic adventure. And it’s going to be so great. And the truth is, no matter what you do, it will never be as great as it as it is in your mind. So you’re really setting yourself up for failure in some ways.

I used to go snowboarding a lot of times in the winter. And I used to like hitting all the jumps. And when I would go down the mountain, I would notice a bunch of young snowboarders who were waiting at the top of the jumps. They may look like they’re waiting their turn. But in fact, that they’re waiting there because they’re actually kind of afraid to hit that jump. And what they don’t realize is that over time, they’re getting colder, they’re physically getting colder. The idea debt of having to make that jump and land it and be impressive is getting greater. So that by the time they actually do it, they’re probably not going to fulfill that dream.

And so one thing I learned is to just hit the jump or just pass it. Just do it in the moment. Or not at all. And so you can move on and wait for the next time.

I try not to to look at the thing I’m going to do as being this amazing great grand thing. Because if I do that, I will probably not achieve what I’m trying to do. It would be like looking at the sun.

Idea Debt is when you spend too much time picturing what a project is going to be like, too much time thinking about how awesome it will be to have this thing done and in the world, too much time imagining how cool you will look, how in demand you’ll be, how much money you’ll make. And way too little time actually making the thing.

I’ve seen so many students struggle for years with Idea Debt. Carrying that debt crippled them. They were beholden to their 12-year-old selves, who had imagined their grown-up future selves as famous manga authors with 40-volume series under their belts.

But they did not have the tools yet to actually make the work happen. And so they invested more and more into this grand idea, making it less and less likely that they’d ever be able to pay it off.

They had binders of lore.

If you recognize yourself, you are definitely not alone. There’s nothing crazy about having Idea Debt. It’s the most natural thing to result when you have big creative ideas, but no real plan for working towards making them happen.

Perfectionism and “The Gap”

What Kazu’s mainly talking about is perfectionism.

Kazu later tweeted, “If I knew I would write/draw 9 volumes before starting Amulet, not sure I would have started. Glad I did!” Of course he’s right. Avoiding Idea Debt is about acting before you think too much and get overwhelmed by how hard, and how important your project feels. That’s what Kazu meant. Take the jump.

So many people let perfectionism stop them. You picture how great the thing will be, and then you think about how inadequate your current skills are, and then you stop. Well, guess what? If you don’t try to make the thing, even with your current skill set, and learn to live with the difference between what you imagine and what you are now capable of, you will never become capable of bigger, better things. It’s humbling, but the flipside is that, if you’re willing to live with what you see as your shortcomings—or better, to just ignore them and keep moving forward—you will eventually bridge that gap between you-of-now and future-you, the creator of your dream project.

Radio producer Ira Glass has this to say about the Gap:

All of us who do creative work, we get into it because we have good taste. But there is a gap. For the first couple years you’re making stuff, what you’re making isn’t so good.

Most everybody I know who does interesting creative work, they went through a phase of years where they had really good taste, they could tell what they were making wasn’t as good as they wanted to be. They knew that it fell short.

And if you are just starting out or you are entering this phase, you gotta know it’s totally normal and the most important possible thing you can do is do a lot of work. Do a huge volume of work. Put yourself on a deadline so that every week or every month you know you’re gonna finish one story.

It is only by going through a volume of work that you’re actually going to catch up, and close that gap, and your work will be as good as your ambitions.

Look, it took me longer to figure out how to do this than anybody I’ve ever met. It takes a while. It’s gonna take you a while. It’s normal to take a while.

You’ve just gotta fight your way through that.

Take the jump, or skip it

There’s another kind of Idea Debt, represented by the second part of Kazu’s snowboarding analogy. “Just take the jump, or skip it.” What happens when you carry Idea Debt for too long, and your life moves on, is that your idea hangs on like an albatross. You can’t move on to new, exciting, more mature work, because you promised yourself you’d finish this thing.

This is called the Sunk Costs Fallacy. You have what feels like a great idea at some point in your life, and then you grab onto it with a death grip, making notes and dreaming about it for years, until it takes over your imaginary space. But you never step back and think: is this really, still, a project I want to be doing?

Even if you’re extremely productive, you can have Idea Debt. There are only so many hours in a week, and you have to make choices.

We are weighed down by old ideas

If we don’t really, truly shake free of them, some part of our brains are devoted to processing on them at all times, and make it impossible to think clearly about what we should devote our time and energy to now.

I’ve carried a huge amount of Idea Debt. But I’m thinking it’s about time to dump it. So many of the projects on my “someday/maybe” list belong to other, earlier versions of me, not the me of today.

The moment I made the conscious choice to fully, permanently abandon those ideas, I recovered huge reserves of brain capacity. It became possible for me to fully focus on the work that fires up the me-of-today. And that instantaneously upped the likelihood that I’ll complete that work, and I’ll put it into the world. That’s the power of choosing.

You’ve grown up. You’ve changed. And all those old ideas you keep returning to and investing more in just because you feel like you ought to—I mean, they’re your ideas! They need care and feeding!—when you kick them all out of the house, you’ll recover massive amounts of psychic energy. And that energy is what you will focus on the one thing you actually do want to be doing, right now.

Is Idea Debt dragging you down? Is it time to cast it off and move forward with new work?

The Creative Focus Workshop can help.

You can find an expanded version of this article, as well as the accompanying activities, in my book, Growing Gills: How to Find Creative Focus When You’re Drowning in Your Daily Life.