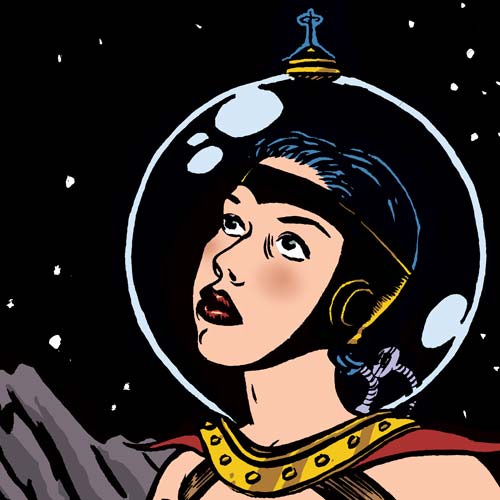 In the mid to late 90s, I was a bit obsessed with early 20th-century adventure comics; Wonder Woman (in the Harry G. Peters era), Flash Gordon and Terry and the Pirates. It was at this time, too, that I drew my short-lived weekly strip Doc Trader for the Willamette Week in Portland, which was kind of a mash-up of/homage to Terry and WW.

I can’t remember what I did this self-portrait for; I think perhaps it was a promotional postcard (a photocopied one, using overlays and a cool spot-color machine in my local copy shop—anyone who knows what this machine was called, or where to find one…please get in touch!). I also later used it (blown up) as a folder for tear sheets to promote my illustration work. But whatever the reason, the basic idea, of drawing myself in the guise of various (ordinarily male) action heroes, stuck with me for several years.

A year later, I was in need of an inside back cover for my Xeric Grant-funded issue of Artbabe (volume 1, number 5), and I came up with this:

Then when I started my Fantagraphics run of Artbabe, I wanted to continue the self-portrait thing as a common design element. So I drew this in 1997 for Artbabe volume 2, number 1.

Around that time, I was asked by Lisa Wainwright to participate in an exhibition she was curating at the Jean Albano Gallery in Chicago called “Pink”. So I did a color version of my Fightin’ G.I., using a cell-painting method (I had the image shot onto transparent film, then painted the back with acrylics.) 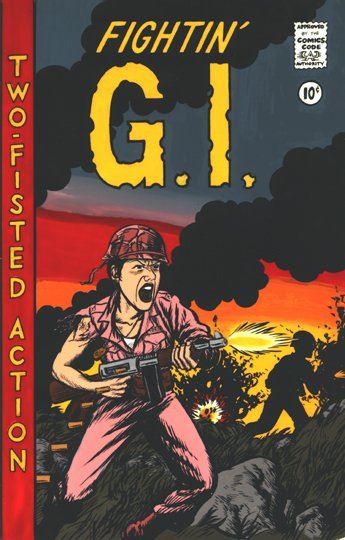 That painting was bought by Jack Lemon, the owner of Landfall Press. Jack offered to publish an edition of three lithographic prints, part of a series he was developing with cartoonists, including Archer Prewitt, I believe. This was, by the way, about two months before I moved to Mexico. I am on record that 1997 (and the first two months of 1998) was a very good year. It was a hectic time. I wish I’d had thought to take pictures of the process, but of course, this is pre-digital, and it wasn’t as ordinary to do so. Making these prints was truly an incredible experience. I hand-drew five color overlays for the color prints, which took their places in the Girls’ Comics series as numbers 4 and 5. I also drew an enormous comic strip in two colors (black and a lovely blue-gray). I later repurposed that strip in my Mirror, Window collection as the Frog Prince. 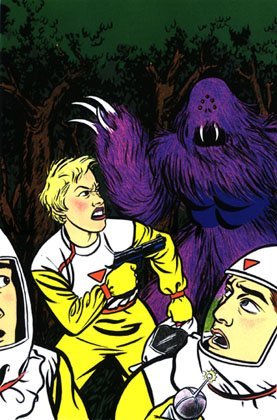 I don’t think these prints were hugely successful (after all, they still have them for sale—as do I—cheap, if you ask me! Get in touch if you want to pick one up for yourself), but working with master printer Barb Labus to learn the process of hand-drawing color overlays, and then watching the big gorgeous prints come off the press…it was like a magic. The drawings here look pretty similar to computer color or the cell-painted approach of the GI piece…trust me, in person, they’re nothing like. Just lush and velvety. 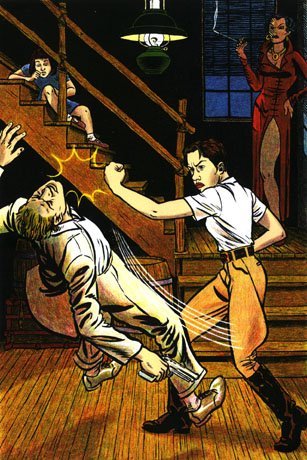 Being a Landfall artist led to me having a pretty large representation at a show at the Davidson Galleries in Seattle. The prints are also in the Milwaukee Art Museum Landfall Press collection. Jack Lemon bought a cell-painted version of the cowgirl above, and he wanted the original space explorer, too, but by then I found that image to be overdrawn and heavy, plus it’s small; just larger than a postcard. And the composition isn’t great. So I redrew it for him. I ran this new version as the inside back cover of Artbabe vol 2. #2.

…But that’s not the end of the story. In the following years, I colored Girls’ Comics #1b (the revised space explorer), and it served as a button, a t-shirt for the Oly comics festival, and the cover for a summer course catalog at the University of Minnesota. I used #2 (Fightin G.I.) as the icon for my old mailing list, the Artbabe Army, a button, and the name and symbol for my “publishing company” under which I co-published Radio: an Illustrated Guide with WBEZ Chicago. And I believe there are a few more uses I’ve forgotten along the way.

When I started thinking about posting these drawings, I just had the idea of collecting them in one place. But as I started reflecting on them collectively as a series, it occurred to me how very productive they were. They have a good, funny concept. (They might have been even more useful in the age of Tumblr and Facebook.) But mainly, as I followed my interest, I put myself in the way of interesting opportunities, and in the end this sequence of simple pieces fomented more experiences and connections than almost anything else I’ve done.

Coping With Staying at Home: How to Survive—and Thrive—While Under Quarantine

Overcome procrastination and anxiety — follow through on your creative habit

Losing focus? There are reasons you derail your progress