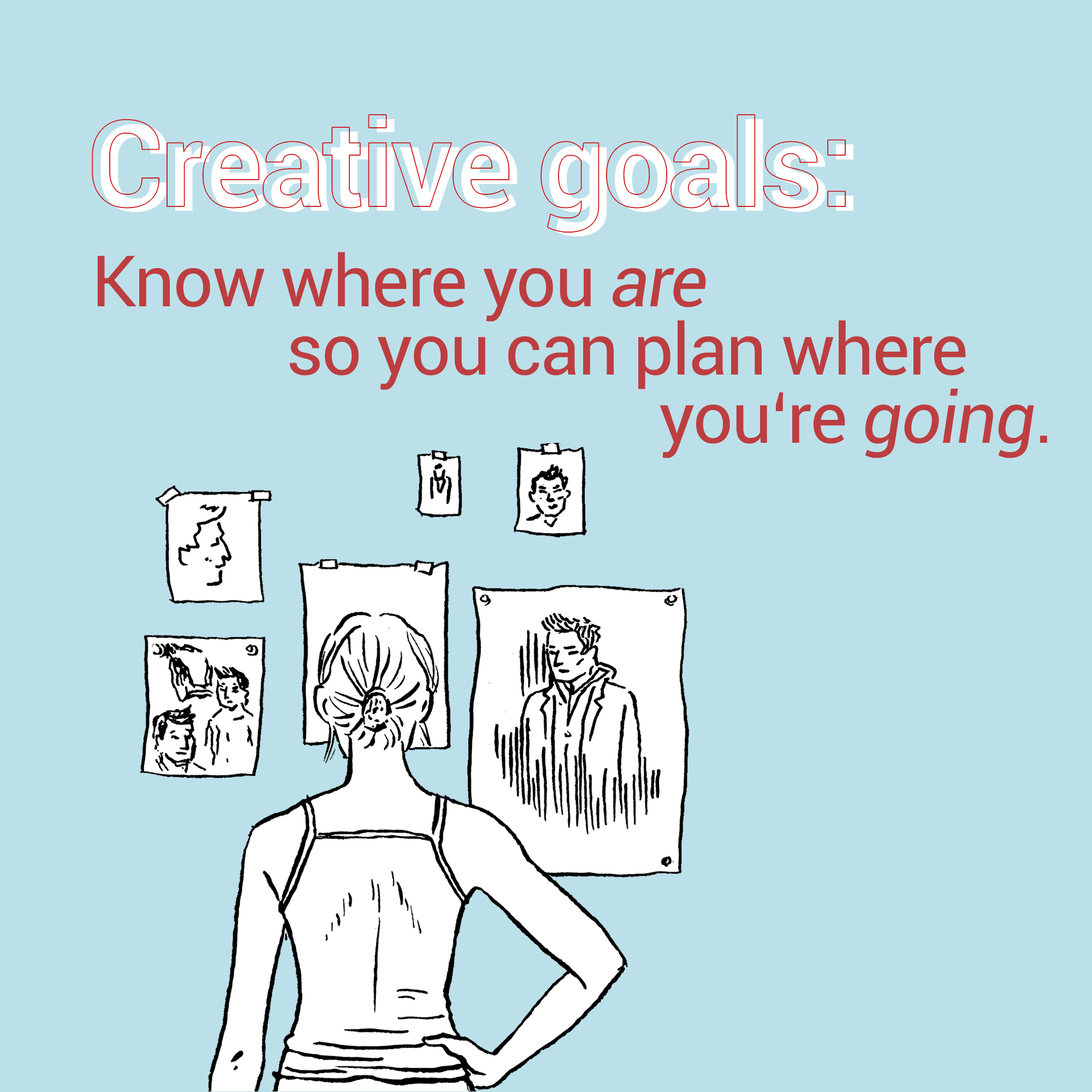 Know where you are so you can plan where you’re going.

The act of creation is so often complicated, emotionally and strategically, by feelings of inadequacy, by procrastination caused by anxiety, by time pressures and money issues.

But one of the largest sources of anxiety and confusion around creative work is that we often don’t really know what we want from it, or what our creative goals are. Is it “simply” an outlet? All creative work is that to some extent: It’s meditative and challenging by turns, it stretches our capacities, it brings us to new understandings. It makes us feel better, more whole.

But there’s another axis: how much do you want your creative output to form a conduit of communication with the world?

Let me explain: if you’re a scrapbooker, your creative goal is likely using that creative process to communicate, but the audience may be tiny, just an immediate family circle. If you’re Beyoncé, your art is a conduit of communication to (and from) millions upon millions.

If you clarify what you really want from your creative goals and work, you can start to make the right decisions about how to move forward with it.

Matt, my husband, is an extremely talented musician. He’s also got a musician’s ear for the world. He notices motifs in soundtracks, he remembers lyrics, he imagines riffs. For Matt, playing music, thinking about music, listening to music are all basic requirements for living a good life.

I had a conversation with him a few years ago about his music and his comics. Comics, and activities derived from comics (teaching, editing, translating, workshops, speaking) are how he makes his living. He’s both deeply engaged in making his comics and we both already knew that he also wants to make a big impact with them in the world. I compared that to his music, calling him a “passionate amateur,” because he was spending hours every week learning bossa nova songs on his guitar, listening to music, and so on, but seemed not to need to go further than that. I thought that was admirable.

But when Matt heard that, he got his back up, and that led him to realize that I was wrong:

His ambitions for his music were in fact quite a bit larger than our living room. He wanted to be sort of…semi-pro.

And in the ensuing few years, he’s gradually trained himself in production, written new songs, and now he’s done most of the music for my podcast, has his own SoundCloud channel, and he’s even got interest from a small label. And who knows, being self aware as a semi-pro may lead him to decide to become less-semi and more-pro in the years to come.

If Matt hadn’t had that realization, that he really did have a larger goal in terms of response to his music, he might never have assessed how he actually invested his time, and realized that, as Quixotic as the process sometimes felt—buying the wrong equipment, learning and re-learning the software, trying and re-trying to record properly—he had to build the practice that will feed the next version of himself.

Recently, as I started to go through all of those end-of-year assessments on all the different creative things I do in my life, I realized I needed a structure to start to understand what my goals are with each of them, so that I can make the right decisions with regard to what to do next. So I created this matrix.

The Y axis represents how important the actual act of creation is to you. How serious you are about it, how necessary it is for your sanity and survival. And the X axis represents the degree to which you want that creation to serve as a conduit of communication with the world. These are both, I should say, extremely personal measures. No one can (or should) tell you how important creating should be to you, nor what your creative goals should be for your work.

And, as with Matt, understanding where we are with a given project on the matrix can allow us to consciously decide to move.

If we know where we are, we can decide to go somewhere else, and plot a course to actually get there.

In defense of the Passionate Amateur

If you like to make things, like knitwear or decorative arts, and you’ve practiced to the point where you’re good at it, people are probably always telling you “you should sell these things!” And maybe you feel like you ought to…but you resist ever really trying. You don’t really want to. You just like making stuff. If you identify this about yourself correctly, then all you really need to do is figure out how you can sort out a path to get the objects you make out of your life so you can feel free to make more stuff. Knowing that can bring you an enormous sense of peace (and make it a lot easier to brush those people off, maybe gifting them with something you’ve made to make space in your house for a new one…).

Are you a passionate amateur singer? You probably spend several nights a week rehearsing with your non-professional chorus or opera troupe. Maybe you’re a painter? Your only problem is that you probably have more canvases around than you know what to do with. That’s a much simpler problem than finding a gallerist and going pro.

I love being a passionate amateur gardener. I want nothing more from gardening but to share it with my immediate friends and family. Never wanting to be paid for it, I could care less if anyone outside my immediate circle ever sees it. If that’s you, about painting, or music, or crafting, or writing, own it. Build your practice for yourself and your small circle. It’s the practice of the creative work that’s crucial. The communication to the world about it is not.

Creative work doesn’t need to earn its keep. If you love what you do, find a way to do more of it.

Teaching in an art school for many years, I saw so many young people coming in who seemed to have decided to go to art school because they liked making art more than most other activities. They decided, “I don’t want to go to school for business or math or whatever, so I’ll go to art school. I want to make art.” Which I get, that makes perfect sense. Making art feeds your soul.

But if you want it to feed your body too, you’ve got to move into that top-right quadrant, and that entails a whole raft of other activities that are not directly making art. Do these art students want to go through what it takes to use their art to communicate with the world? Do they really want to professionalize what’s essentially an outlet for them? Or do they just think, “I like this so much, I should make it my job.”

The lament of the pro

For my part, when it comes to my books, I want the making—which is intense, it’s demanding—I want that to be dwarfed by the connection, the communication I build around the work in the world: what it makes possible for others, what it makes possible for me. I want that part to be as big as the making. Bigger. I do want to have an impact, but more so, I want to be in a conversation about what’s in the book. (And it’s difficult to inspire a response in the world that outweighs the making, because making the books is so damn hard.)

And then, there are so many things that go into building that communication-response feedback loop that aren’t making the work. Interviews, PR, writing a blog, building an email list…hell, I’m making a whole podcast about Out on the Wire, which has become a complete creative project of its own. That’s what goes into making impact with your work: intensive, targeted, continuous communication around it and with it.

I’m trying to get to that level of response with Out on the Wire, but neither it nor any of my books have yet hit that point, and that’s a source of frustration for me.

I aim for my books to approach the right edge of the matrix, but in reality they’re closer to the center line than I’m comfortable with.

That’s hard to live with. And it’s hard to jump back into the fray with a new work when the last one didn’t hit your creative goals.

And before you start in with exceptions: I know there are exceptions. There are people whose art seems miraculously to be found and shared, seemingly without them needing to ever lift a finger. But waiting to be “discovered” is waiting to win the lottery. Sure, you have to be in it to win it (i.e. putting work out regularly), but you’re still basically never going to win it, so get a strategy. That strategy will be different depending on how you want to lead your creative life, of course. I’m not suggesting everyone should spend half their time blogging and the rest on Twitter. You have to find the right balance for you.

I developed this matrix to help me clarify my feelings and goals relative to my various works. I wanted to be able to identify where to put my efforts. Your creative practice is obviously a more complicated thing than a little grid can capture, but try it and see if it doesn’t bring you a bit of clarity, as it did Matt. Go through the exercise of placing your finger where you think your work is, and then slide it to where you want it to be. And then think about what you’re going to do to get it there.