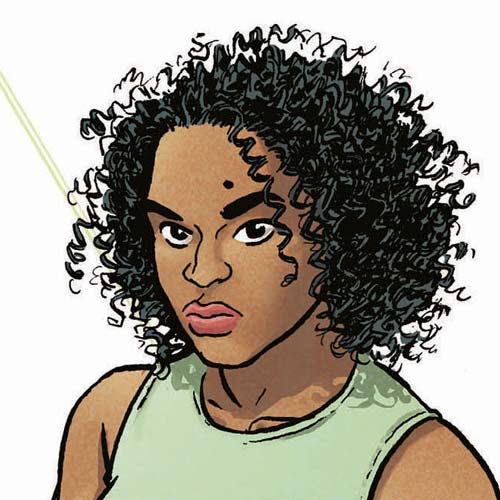 Trish Trash: Rollergirl sur Mars will have its avant-première in a week and a half, which means I’ll finally get to put my hands on the actual cover of this book, that I’ve been working so long and hard on. This is the final cover, the one you’ll see if you get a copy yourself! Here’re some of my experiences with designing the book covers for Trish Trash and Susan Choi’s My Education.

Getting to this cover was a long and complicated process. I’ve been working on covers for lots of books lately, sending in rough sketches for Out on the Wire (really rough, not ready for prime time), and trying to come up with covers for all three volumes of Trish Trash: Rollergirl sur Mars now, before the first one is even out.

Based on my first concept, we developed a cover for TT1 last year that we were all pretty happy with—Trish on the hoverderby track. Simple, direct, energetic. I should have known it was just too easy to be actually finished.

I visited the Dargaud offices to work with my editor, Thomas Ragon, the cover designer Philippe Ravon, and the logo and interior designer, Renaud DeChateaubourg, to work on designing book cover layouts and logos.

We decided to make the image simpler.

I liked this idea—I had always wanted to do this thing stripped down:

Finally, though, after a lot of discussion, we realized that the “this is a major book about a completely new scifi world” was not exactly getting communicated by some women on a derby track, no matter how scifi-ish the track itself. So, literally, back to the drawing board.

…And a new slew of sketches:

And finally, a new cover design:

It always feels like a huge deal, and a lot of stressful trouble, to do a cover. I mean, it’s ridiculously important, it’s why most people will ever bother to pick up a book. And they will probably see it as a postage-stamp-sized 72 dpi icon. So it better be powerful. The stakes are so high. I kind of hate it, but when it really works, the labor and anxiety is worth it.

All this put me in mind of a book cover, for My Education, by Susan Choi, that I drew when I first arrived at the Maison des Auteurs here in Angoulême, in 2012. I went through a huge number of sketches on this one too, vetted and fretted over by a multitude of people. But in the end, it turned out well, so well that I’ve resold it for the paperback, the Spanish edition, and even the cover of the Penguin academic catalog, and might have actually eventually been compensated for my time on it! I can only cross my fingers that the same will be true of Trish Trash.

Designing the book cover for My Education

Some of the many versions: