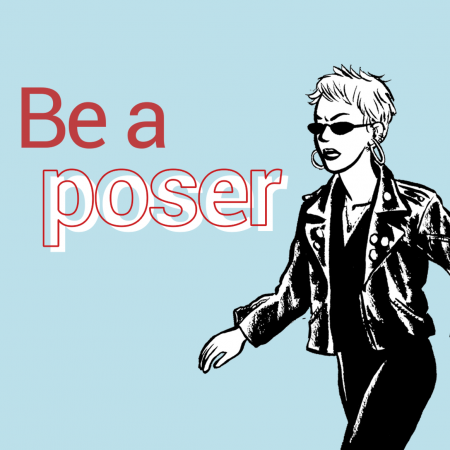 I was listening to Marc Maron interview Kim Gordon (WTF, episode 588 [31:30]), and there was this bit in the middle that just knocked me back. Marc is asking her about her early years. Remember: This is a woman who was regularly flying, by herself, at age 15, from LA to SF to catch rock shows at the Fillmore (in 1969, no less). This is a woman who moved to the East Village in 1981, saw No Wave bands playing, and said, I can do that.

KG: I realized that I still carry this idea of myself…that maybe, having a daughter, I wanted to almost overcompensate and have this really stable environment that was so square in the house.

I realized, why do I think of myself like that? Ha ha. I’m actually not like that at all, But I have that in me, because that’s where I came from.

MM: Did that happen…that really must have just happened after you had the baby, right?

KG: I think I always, you know, when I moved to New York I was always like, god, I’m just so…

KG: …you know, middle class. It was just like fuckin’ like, I’m never gonna be punk rock.

MM: …But you’re so punk rock! I think for a whole generation of people, you’re like, it!  You’re better than punk rock!

…If Kim Fucking Gordon doesn’t think she’s punk enough, what the hell are the rest of us supposed to do?

“I’m just so, you know, middle class. It was just like fuckin’ like, I’m never gonna be punk rock.”

You can hear the incredulity in Marc Maron’s voice—it takes him several seconds to even absorb what Kim is trying to say.

This totally dragged me back to my own not-really-punk-enough youth, that youth where I went to punk shows on a weekly basis, collected records, and hung out with others doing the same, but did not dye my hair or get a crazy haircut, and was 15-20 years too late (and born in the wrong country) to actually be “punk.”

But, I mean, what else is being punk than going to punk shows? Do you have to have personally known the Sex Pistols, and/or played in bands in the East Village in 1981 or earlier?

What is authenticity if not actually doing the things you claim you care about day in and day out?

But as Groucho Marx said: “I don’t want to belong to any club that will accept me as a member.” Part of valorizing some identity or role or group is feeling like it’s hard to get into. If it were easy, everybody would be punk, right?

And then being punk would suck.

This has been a persistent concern of mine for way too long. The authenticity police (in the form of her “friends,” but more importantly in her own mind) are arguably the downfall of Carla, my poor, earnest protagonist in La Perdida. And going further back, my Artbabe stories (collected in Mirror, Window and Soundtrack) are packed full of characters busy parading their proto-hipster team colors (this was the mid-late-90s), hoping they won’t get called out.

But I’m tired of it.

Matt (Madden) told me recently that he has problems with the word “pretentious” because it puts down the very idea of ambition, of trying to be or do anything that you’re not born to. And as middle-class American white kids from the suburbs (that’s me and Matt, not necessarily you, of course), what are we born to?

A kind of vague (though very real) entitlement and power, that nonetheless requires that we stick to our own kind, not ask too many questions, and keep our heads down? What if we have an ambition to be something else? What if we want to live in a more egalitarian way, or we want to do something risky with our lives that brings a less stable income, or we prefer to live in some other country? Are we then doomed to be posers? If we don’t keep trying, what’ll there be to look back on? To build on?

Oh, the knots we tie ourselves into. I won’t use the spelling I learned as a teen, “poseur,” because although it means “pretentious” in French, to use French in everyday language is in itself pretentious. (By the way, I live in France. You do the math.)

I’m just gonna come right out with it: I am a poser.

I’m a cartoonist who didn’t go to art school.

I teach, but I have no teaching credentials.

I wrote two books about how radio producers make stories before I ever made a radio story.

I write articles that have no basis in research whatsoever.

But you know what? I’m a good cartoonist. I’m an excellent teacher. People get a lot out of my blog even when (maybe especially when) I have no idea what I’m doing. I was front-person of a pretty decent band for a few years. I have French friends who understand me just fine.

And I keep trying.

You become the thing you want to be, not be being deemed worthy by someone else, but by choosing that thing, over and over, regardless of what anyone thinks. You choose how you spend your time. You choose what matters to you. You choose to keep trying. Your authentic self is made up of what you truly care about and devote yourself to.

Be a poser. Be pretentious. Be ambitious. Keep trying, even though it’s way too scary and you’ll never be in the big leagues and your inner authenticity police are sneering at you.

Be the thing you want to be.